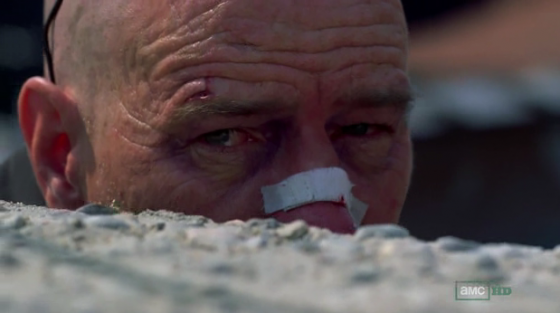 Breaking Bad has been on a roll unlike any other TV show I’ve ever seen. The tension builds in every episode and just when we think we know what’s going to happen, it makes us wait or it changes the game. The latest chapter was a perfect set up for the finale. They didn’t reveal much about how things are going to play out, but they kept us on the edge of our seats wanting more.

The big thing that happened in this episode was the reuniting of Walt and Jesse. Their relationship has been very contentious lately, but when Gus poisons Brock to get Jesse to flip on Walt, that’s too much for Jesse to take. He doesn’t necessarily value his own life above all others, however, he does value children. Upon hearing Gus threatened Mr. White’s family, compounded with the poisoning, and Jesse is ready to flip. He may be reluctant to do so, but he really doesn’t see any other way.

It’s important to note that creator Vince Gilligan and the writers did a great job of eliminating Mike from the equation. There’s no way Walt and Jesse would be allowed to cook up a plan to blow up Gus if Mike, aka “The Shadow,” was in the picture the whole time; he’s still nursing his wounds in Mexico. A lesser show would just have him not be there, but Breaking Bad plausibly handled his absence. Good work.

The other big thing at work is Hank finally convinces Gomez and the DEA to take a look at the laundry plant where the super lab is. Gus feels the heat and takes immediate action. If you’re a meth dealing gangster, there’s no way you sit idly by and let the DEA figure you out. Sure the lab is beautifully hidden, but there’s enough evidence to launch an investigation.

This leads to my final thought: who is going to survive the finale? I’m almost 100 percent sure Walt survives. There’s no show without Walter White, but knowing what we know, does Jesse survive? Is the series ready to kill off an Emmy-winner and go without him for the final 16 episodes? Is Hank too close to everything? Does he get wacked? Gus has already threatened Walt’s family. Will there be an attempt on their lives? This reminds me — the moment that Walt is saying goodbye to Skyler and Holly was beautifully touching because he thought it would be the last time he sees them.

I don’t think I’ve ever been as excited for a season finale before. I really hope there’s some sort of closure and finality with part of this story. Gus is an amazing character so it would suck to lose him, but we don’t want a cliffhanger, do we? Then again, this has never been a predictable show. Would it be so bad if Gus stays around? What if they find a way to work together? Maybe Hank finds out about Walt and next season is Walt on the run? There are a lot of questions yet to be resolved and frankly, I can’t wait.