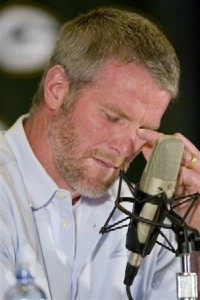 Peter King of Sports Illustrated reported in today’s edition of Monday Morning Quarterback (if you aren’t reading it, you should be) that “An NFL player who knows the quarterback well told me Favre said to him after the season, ‘I’m 100 percent positive I’ll never put on pads again in my life.'”

Is this actually noteworthy as news?  Favre is the king of waffling on a decision that effects the lives of many.  Peter King even buried the story in his article, saying that “The reason I don’t make that  a headline is simple: Favre changes his mind as often as I drink a latte. Which is to say, a lot.”

So why report it here?  One word… Hope.

The hope a Vikings fan must feel that their upcoming season won’t end with Brett Favre’s last meaningful pass for the team being an interception.

and the 2009 Vikings in the NFC Championship Game.

To remind you of why it’s a good thing he’s planning to retire:

Exhibit A: The radio call of the Favre interception against the Saints in the NFC Championship Game

Exhibit B: Favre’s last pass as a Packer against the Giants in the NFC Championship Game (Gotta love the juxtaposition with the Southwest ad)

*His last pass attempt for the Jets garnered a penalty for Illegal Forward Pass.