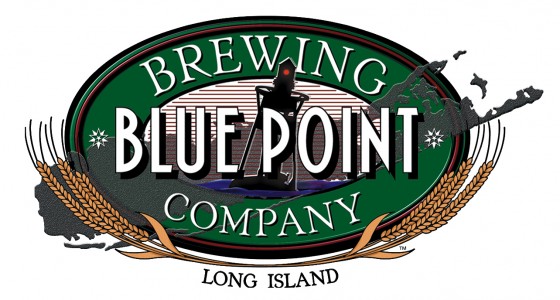 When you hear ‘Long Island’ you probably don’t immediately think of beer, however Blue Point Brewing, out of Patchogue in Suffolk County, has slowly but surely been working to change that.  Having recently celebrated their 10th anniversary, Blue Point brews over 10,000 kegs of beer per year in 16 varieties and has 13 awards to show for it, including a World Beer Cup Gold medal for its flagship Toasted Lager. 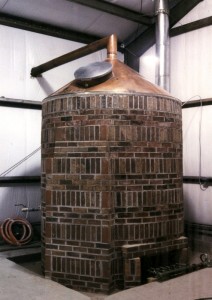 Blue Point was started by Mark Burford and Pete Cotter, drinking buddies and homebrewers who would meet for beers at a local bar that was also part deli.  Little did they know that more than a decade later, the very bar they were drinking at would stop serving cold cuts and start serving their own brand of beer (and still do) , just a few blocks away from their own 5,000 square foot brewery.

Mark and Pete built the brewery from scratch in an old Penguin Ice factory, with a hodge podge of brewing equipment they bought at auctions from all over the country.  The centerpiece was a direct-fire, brick brew kettle from Maryland that they took apart and then rebuilt brick by brick.  This unique kettle gives the Toasted Lager its slightly toasted flavor, and naturally, its name.  Blue Point prides itself on brewing all of its beers with natural ingredients, pure, fresh and unpasteurized. 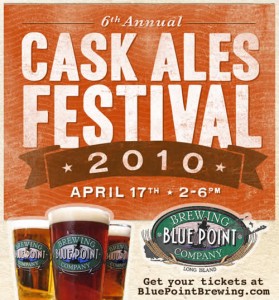 Another fine feature of the brewery is the tasting room. Intimate, yet always with a friendly vibe and helpful and knowledgeable bartenders, sample almost all the brews on Thursday, Friday and Saturday afternoons and hang with friends at the picnic tables in the parking lot.  In the summertime it’s like a full blown backyard bash for those in the know.  Many national acts have also played out back, like the Zen Tricksters, Robert Randolph and the Family Band and lots of talented local musicians, who provide the ambiance to the parties and annual events, like the Cask Ale Festival, happening in 2010 on Saturday, April 17th.
Blue Point bottles and distributes Toasted Lager, Blueberry Ale and Hoptical Illusion year-round in 12 oz. bottles, plus a seasonal; Spring Fling Copper Ale, Summer Ale, Oktoberfest and Winter Ale, which can all be found in a variety 12-pack at better beer stores.  Other limited releases available in 22 oz. bottles include RastafaRye Ale, a 2009 GABF Silver medalist in the exploding Rye beer category (portions of sales of this one goes to help underprivileged children around the world), Pale Ale, and the equally awesome and potent Old Howling Bastard barleywine.  Double Blonde, Golden Ale, Oatmeal Stout, Sour Cherry Imperial Stout, 10th Anniversary IPA and No Apologies Imperial IPA.

oasted Lager: Perhaps my favorite session beer of all time, although beer geeks will say its 5.5% abv (alcohol by volume) is technically too high to be drunk en masse.   The toasted flavor really comes through and separates this amber lager from any other I’ve ever had.  It’s no surprise this beer won Gold in the 2006 World Beer Cup and Silver at the 2007 Great American Beer Festival, two of the most prestigious beer competitions in the world.

Blueberry Ale: There are a lot of blueberry beers out there, most I find end up being too heavy on the blueberry, too light on the beer.  This light, crisp ale is refreshing and has the perfect essence of the fruit.  You’d think 132 pounds of blueberries would be too much, but it’s just right and makes this brew a fan favorite.

Hoptical Illusion: Another multiple award winner, this American IPA is different in that it doesn’t knock you out with hops, but surprises you with a nice blend of malt and citrus flavor, with a grapefruit taste leading the way.  Again, keeping it unique and not overpowering any of your taste buds, something Blue Point excels at.  (Not to mention the psychedelic label art.)