Brewing All Grain with Mr. Beer

After brewing with Mr. Beer for a few years, I started thinking about upgrading to a more advanced home-brewing system. Instead I decided to try out some more advanced brewing options with the Mr. Beer equipment I already own. So I headed over to Mr Beer Fans for a few pointers then I found a 2-gallon recipe for Nut Brown Ale at Cats Meow 3 (a beer recipe database). With recipe in hand, I ran over to my local homebrew store where I ended up with a bag full of grain, an ounce of hops, and some yeast. It turns out you don’t actually need a 2 gallon recipe, as they’ll put your recipe into their system and tell you how much of each ingredient you need to make a 2-gallon batch instead of the usual five.

I’m up to my fifth batch of All Grain beer now, so I’m no expert. I’ve been refining my process as I get more experience and read more about brewing so I’m going to go over what I’ve done, and how my beer turned out.

First off we need a few reference materials:

Next up we need some equipment:

And one of the following

Next we need our Ingredients (the ingredients pictured to the right are actually from a pale ale I made a few months ago, hence the light grains and large amount of hops):

Finally, the most important thing we need is a glass of home brew, or at least a good craft beer, to help inspire this beer we’re making to be as good as it can be.

According to the Mr Beer Instructions, there are four steps to brewing beer:

While this is technically true, you actually have to sanitize twice, once before brewing and once before bottling (and really any other time that you think something might not be clean enough). So really I’d say there are three steps and sanitizing is part of the Brewing and Bottling steps.

There are two different ways to homebrew beer. The first way is Malt Extract Brewing, which is what the Mr. Beer kit’s use. Malt Extract is either a canned or dried extract of malted barley that might or might not already contain hops. It’s a condensed version of the result of the first few steps of All-Grain Brewing, which is the second type of homebrewing and is what we’re doing Today. Malt Extract Brewing is faster and easier than All-Grain, but you don’t want the neighbors to look down on your lack of brewing prowess, so we had to make the switch to All-Grain.

Sanitizing is one of the most important steps in the brewing process, which might be the reason that Mr. Beer gave it it’s own section. This step kills any wild yeast, bacteria, or mold that can create off flavors in your beer by fermenting your beer instead of the cultured yeast that you’ll add at the end of the brewing process. There are a few ways to sanitize your equipment such as using a bleach solution, but the easiest way is by using a no rinse cleanser like One Step or Easy Clean. Add a gallon or two of water and 1 tablespoon per gallon of your no rinse cleanser to your largest container that you’ll be using today (most likely your pot). Swirl the liquid around to be sure that all the surfaces are covered, add your metal spoon, tablespoon, and thermometer and let it sit for at least 10 minutes. After 10 minutes pour a little of the solution onto a plate and then put your sanitized utensils on the plate, and pour the rest of the sanitizer into your next biggest container, repeat this until everything is sanitized, be sure to let some of it flow through the tap on your Mr. Beer fermentor. One other tip, never run the vacuum while you’re making beer, it will kick bacteria into the air, which could ruin all your hard work.

The Mash is basically like making tea (called wort) from malted barley. In this step we’re going to soak the grains in 5 quarts of 153 degree water for 2 hours (according to the Papazian book you should only need to do this for up to an hour, but I’m following the recipe). This does two things, the water extracts starches from the grains, and enzymes in the barley convert the starches into fermentable sugars. The enzymes work best when the temperature is between 150 and 158 degrees, which is the reason why the water must be held at 153 degrees. The Mashin temperature (temp the recipe wants us to start the Mash at) is listed as 132 degrees which I imagine is for a protein rest (allowing your grains to soak at a temp between 113-131 degrees which allows other enzymes to break down proteins in your grain to reduce protein haze), but this is unnecessary for fully modified grain, which includes everything but the Roasted Barley in our recipe. So, I’m going to skip this step because I’m not overly concerned with haze in a dark beer. 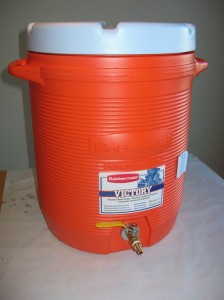 The second way is by using a mash tun. A mash tun is really just a cooler, in my case a 5-gallon drink cooler with a modified spigot. I found the instructions on homebrewtalk.com. I put the grains into the cooler, and then added my water heated to about 165. The mash tun can hold the temperature much better than the pot covered with blankets but when it’s in there for 2 hours the temperature will drop a bit. To heat it back up I drained some of the wort into a pot, heated it up to around 160 and added it back in, this seemed to work pretty well.

At this point we’re at the step listed as the mash out in the directions. What we do here is raise the Temperature of our mash to 168 degrees for 5 minutes. In the case of using the mash tun I drained off a little wort heated it and added it back until I hit 170. This step causes the enzymes in the wort to stop the starch to sugar conversion.

Wort Separation is exactly what it sounds like, separating the liquid from the grains. In my case my mash tun has a strainer (stainless steal braid) attached to the inside of the spigot, which allows me to simply drain the cooler to separate the liquid. If you used a grain sack you can just pull the grains out otherwise you’ll have to separate the grains by pouring the wort through a strainer (I covered one with cheese cloth when I’ve done this in the past otherwise you’ll get a lot of sediment in your beer unless your strainer has very small holes).

Sparging is the process of rinsing the grains with more hot water to drain off any of the sugars that didn’t wash away during the separation, in the case of the this recipe 2.5 gallons of 165 degree water (My pot can only hold 3 gallons so I actually only used 1.5 gallons). The method of sparging I used here is called batch sparging, the other method used is called fly sparging. Fly sparging involves slowly draining your wort as you slowly sprinkle hot water over your grains. Batch sparging is faster and easier but might not be as efficient as fly sparging. With my mash tun that simply means pouring the water in, letting it sit for a few minutes and then draining it. If you strained your loose grains you can either pour the water through your grains or add the grains to the additional water and then strain them again. If you used a grain sack you can let it soak for a few minutes and then remove it from the water. A grain sack might seem like the way to go, compared to having the grains loose, but the problem that I ran into was that the grains don’t mix with the water as well when it’s in the bag and I ended up with a lower alcohol beer because of it. Either that or I wrapped them up too tightly.

In this step we have to boil the wort for an hour and a half. This step serves a few purposes it ensures that the starch to sugar conversion has stopped and it kills any bacteria that might still exist in the wort. This is also the step where we add the hops and any additional sweeteners, in our case the molasses (which I actually forgot this time). The molasses can be added at the beginning but the recipe calls for the hops to be added 30 minutes before the end of the boil. Adding hops at different points in the boil will actually impart different properties into our beer. Hops added at the end of the boil are known as aroma hops, because along with a little bitterness they add a nice hoppy aroma to your beer. Hops added toward the beginning of the boil are known as bittering hops, because they will add bitterness (more bitterness the longer they boil) to the beer but any aroma from the hops will be boiled away. Willamette hops (the one we’re using in this beer) is typically used as an aroma hop, but with only a half ounce and 30 minutes before the end of the boil it won’t impart much aroma, but we’re making a brown ale so we’re not looking for a lot of hoppyness.

After the boil we move the wort into the keg, but first we need to cool it down to at least 75 degrees as quickly as possible. We need to do this quickly for two reasons, first hot, but not boiling, wort will produce dimethyl sulfide which will add off flavors to your beer, and second while your beer is between about 90 and 140 degrees it is especially susceptible to bacteria. There are many products available to help with this, such as immersion chillers and counterflow chillers, but I’ve just been allowing my brew pot to float in a cooler full of ice water.

Now that the wort is chilled, we need to Carefully pour it into the Mr. Beer Fermentor, I say carefully because otherwise it’ll get very messy. Then, fill your hydrometer and let it sit during the next step, and record your Specific Gravity. When bottling, you’ll do this again to determine your alcohol content. 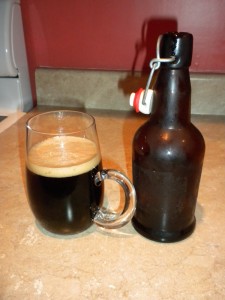 After we add the yeast we should let it sit for a few minutes and then stir the wort vigorously to oxygenate it and then put the lid on. The fermentor should then be placed in a location with a stable temperature around 60-70 degrees for around 1-2 weeks.

After fermentation has completed comes the last two steps in the process, Bottling and Conditioning, but because they’re both exactly the same for All-Grain as they are for Mr. Beer’s kits, I’ll let you follow their instructions.

I have to say this is my best beer since I’ve started brewing all-grain. It’s a little darker than I wanted in a Nut Brown, it has a smooth dry roasted flavor more along the lines of a porter or a stout. Next up I’m making a Banana Cream Stout, that might sound a little weird and who knows if I’ll actually end up with any banana flavor, but as a home brewer I get to make whatever pops into my head. And after that I’m making a Dogfish Head 60 Minute IPA clone.

Now, it’s time for me to, as Charlie Papazian says, “Relax. Don’t Worry. Have a Homebrew”.

Editor’s Note : This article was discussed on our podcast, The Gunaxin Show.