A History of Monster Candies 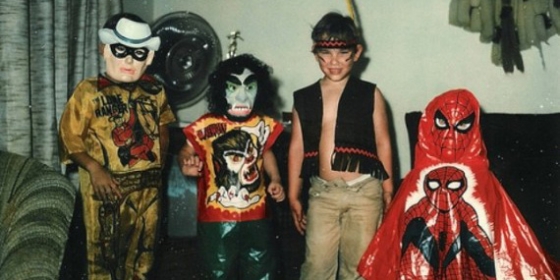 When we were kids, Halloween was about one thing. Candy. Sure we enjoyed dressing up in costumes, but they were just a means to an end, and the end was candy in our bag. Our favorite candy were always Monster Candies, which were popular back in the glory days of Trick or Treating for many of us. That’s right, the early 60’s through the early 80’s… we’re that old. Those were the good old days when you’d march around in the dark with full face covers on, tripping over your capes while your parents stood at the end of the street, coffee in hand, yammering on with the neighbors. Halloween used to be safe, worry-free, and glorious… without the need for reflective costumes. We went door to door, not trunk to trunk. And this, some how brings us back to Monster Candies. Here are eight of our favorites. 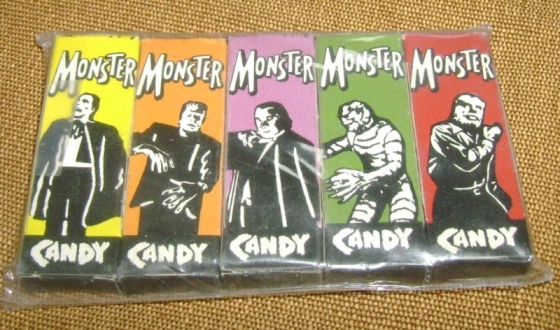 When one thinks of monster candies and their wonderfully Pop Art box design, one can’t help but remember the line of candies featuring the Universal Movie Monsters. Originally produced in the early 1960’s, the candy within the box was nothing too special. In fact, it was pretty reminiscent of the old candy chalk-style cigarettes. But it was never the candy itself that was so popular. Nope, it was the boxes. A set of four was the classic run and featured Dracula, Frankenstein’s Monster, The Mummy, and The Creature From the Black Lagoon. Later, sometime in the 70’s or 80’s, they added The Bride of Frankenstein and The Wolfman. The 1963 versions are quite rare, but the line still runs as far as we know and you can get your hands on them still in some markets. 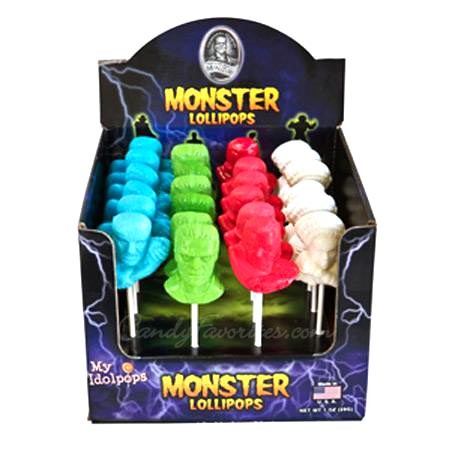 If this were anything other than a candy article, that title might sound a little weird. Anyway,if you’d like to get your monster-loving mitts on a different kind of creature candy this year, you can now get Universal Movie Monsters Suckers! Featuring the delicious busts of Dracula, Frankenstein’s Monster, The Bride of Frankenstein, and The Wolfman. But what do they taste like, you might be asking yourself? Well, how about strawberry, raspberry, sour apple, and… marshmallow? Um… okay. 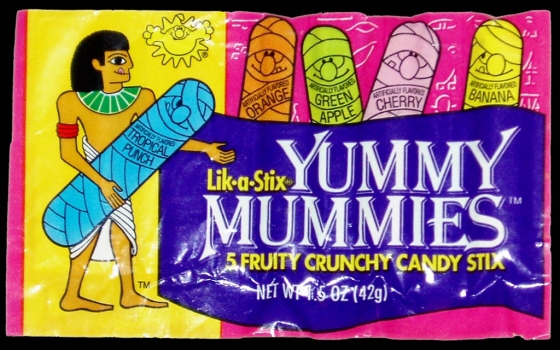 At one time or another, we’d be willing to believe you’ve had Lik-a-Stix (or Lik-M-Aid, or Fun Dip), we all likely have. You know, those little envelopes of powdered, flavored sugar with the attached stick that you, presumably, lick until slick and jam in the flavoring. Sounds kinda gross when you put it like that, but there you are. In most packs, it’s the flavor that sticks out over the candy tool, but in the case of these awesome Mummies, it’s the sticks themselves! Why? Because they’re Mummies, that’s why! Do they taste any differently? Yep! How about Tropical Punch, Orange, Green Apple, Cherry, and Banana! Would that interest you? Yeah, well, too bad because they don’t make them anymore. 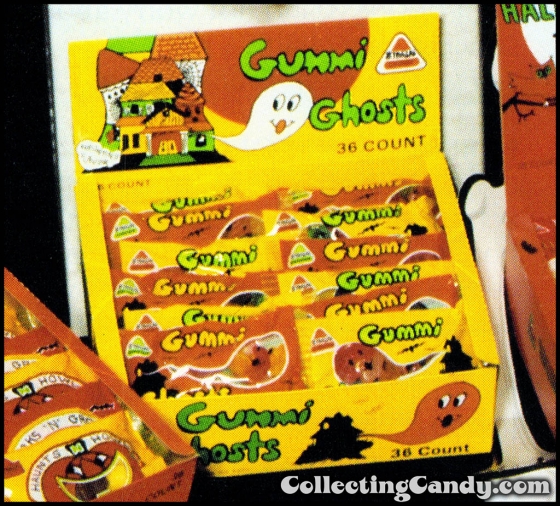 Stark has made some pretty cool Halloween related candies and treats over the years, but we here remember the Gummi Ghosts the most. Back in the early 90’s when the Gummi craze went on an absolute rampage and everything from giant rats to giant worms to giant body parts found its way into the chewy molded confections. The ghosts came in two flavors that we could find: strawberry and cherry and even though gummi is kind of a nasty candy texture, they did exist and people liked them. 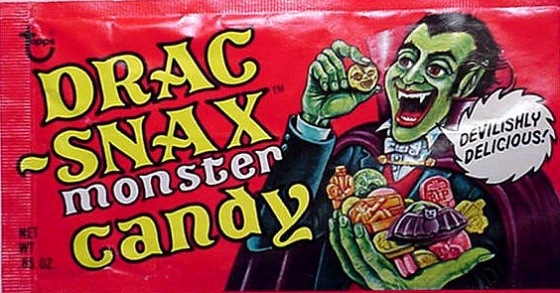 Topps does wonders with just about everything it puts its name on. Known the world over as a sports card company, a novelty card company (think Garbage Pail Kids and Dinosaurs Attack), and even a candy company, Topps will lend its name to just about anything up to and including the Halloween treat, Drac Snax Monster Candy. So what is it? Well, they’re little bags full of five different crunchy, fruity candy shapes including bats, headstones, and vampires. They don’t combine to form anything and they’re not a puzzle so what’s the deal? Novelty. That’s what. Anyway, these are long gone, too. 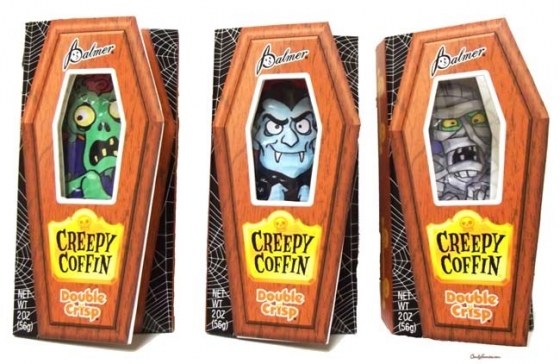 Finally some chocolate! Crunchy and powdery and chewy candy is one thing, and seriously we can only take so much fruit flavoring, but chocolate! Yes, please! Oh, and these kick ass candies you can actually still acquire just about everywhere! Maybe now I can stop using exclamation marks! I will, right now. The Palmer Creepy Coffins include two ounces of milk chocolate molded and wrapped to look like a vampire, a werewolf, and a mummy. Presumably, they just taste like chocolate, but how fun would it be if they were filled with like cherry cordial stuff. Gross and tasty! 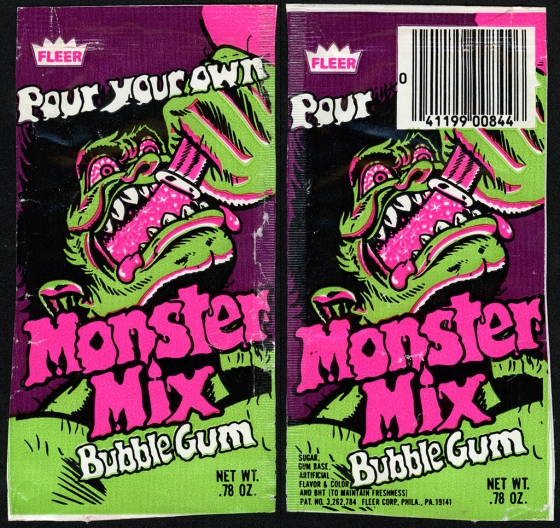 It’s gum time! But wait, powdered gum? Well apparently back in the 70’s (no, we don’t remember either), powdered gum was all the rage. Because reasons we do not readily understand. Anyway, Fleer Monster Mix Bubble Gum is just that: powdered gum in a box that appears to be all one flavor and touts the fact that you can, “pour your own.” We don’t get that one either. Look, just because this treat confounds us does not take away from the fact that the packaging is super groovy 70’s epic artwork. 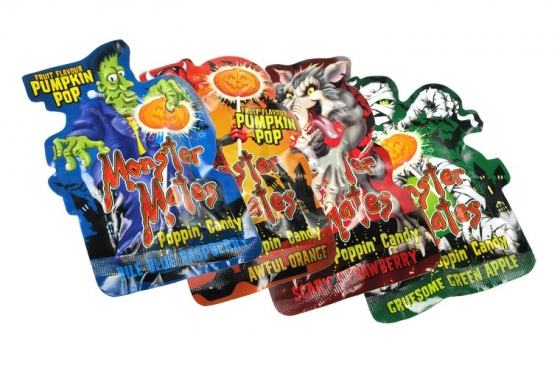 We think by the title alone you can probably guess what kind of candy this is. If you said Pop Rocks, you would be absolutely correct. We have green apple, blue raspberry (we still don’t get that, but whatever), and strawberry. The coolest part is, of course, the packaging. It comes as a giant bag featuring a haunted house, a drooling werewolf, and a scarecrow because Halloween doesn’t have to make any sense. Anyway, each individual package inside is just a variation on the theme featuring a mummy, a Frankenstein, and a Poppin’ Pumpkin Sucker! They’re really cool. Monsters!