Humor > News > A Brief History of Nudity and Statues

A Brief History of Nudity and Statues 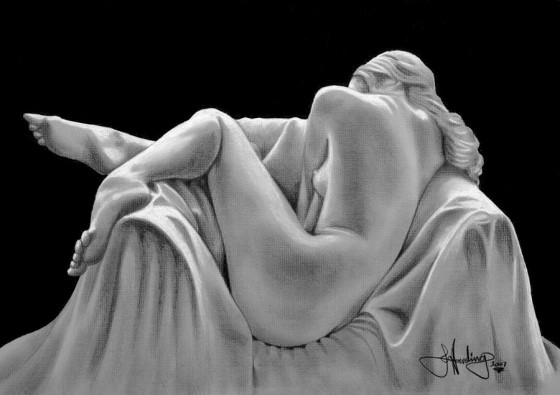 A statue suspected to be the Roman personification of prosperity Abundantia has been standing, perfectly happily in a church in Bristol in the UK for centuries now. (Editor’s Note : The American personification of prosperity and abundance, Christina Hendricks, has been performing on Mad Men for years now.) Well, it was actually hidden above a fire place and was discovered during a restoration of the 12th century church. It also wasn’t the only thing hidden.

A breast plate had been placed over the woman’s chest to hide her modesty – some statues are very bashful – and to presumably help maintain the concentration of the Methodists who frequented the venue. In fact the founder of Methodism John Wesley often held prayer meetings in the place, perhaps he felt the pleasures of cold carved anthropomorphic stone was just too much for his followers? 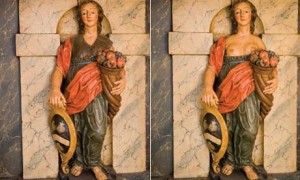 Either way the poor lass had to hide her ample bosom beneath a lead breast plate. Although that wasn’t enough for some people and when the plate was removed it was discovered that her breasts had actually been painted over.

Today of course we live in enlightened times and statues are free to parade around as naked as the day they were carved while the rest of us have to hide our shame beneath a swath of restrictive clothing. Is there really much difference between a statue and a person standing really really still though? Couldn’t we all be nude if we just perfected the art of musical chairs and remained frozen, for a little while at least?

As silly as the idea seems, this has actually already happened. In Britain in the thirties one eccentric old lady named Laura Henderson decided nudity was the only was to go and so opened up the Windmill Theater in 1930 showing all kinds of risque amounts of skin on stage. However the censors weren’t all that happy so they said the incredibly popular club could only remain open if the nude girls didn’t move.

The club then added a whole load of moveable props likes ropes and rotating machines to the act so the girls might move but not of their own volition. The people at the censors office also took a liking to Henderson and would give the theater a heads up when one prominent censor was on his way round to inspect the girls, one George Titman. 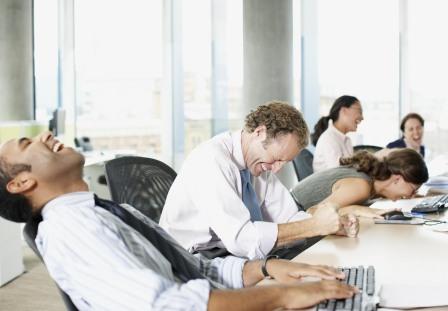 "Why does this always happen when I introduce myself?"

See how lucky we are today, we can ogle whoever we want, from moving women to beloved cartoon figures in all sorts of undress simply at the click of a mouse or with the visit to a strip club or a museum. So why are you still reading this? There’s statues to be fondled!