Bristol Palin Speaks, No One Listens 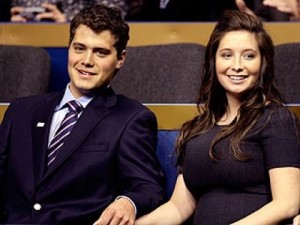 The unmarried teen mom said, “Everyone should be abstinent, but it’s just not realistic at all.” We assume she is talking about teens. She also said she hopes other girls would learn from her example in order to help prevent teen pregnancy.

Now, this is when I start to wonder. Are there, in fact, girls out there who are learning from Bristol Palin? Are there girls, who, virtually spring chickens themselves, have the image of Bristol Palin in their head during that critical moment? Can we conclude that, from here on out, any teen who gives birth must not have seen the Fox News interview and did not, in fact, learn from Bristol Palin? I’d especially like to know if she’s connecting with women who aren’t nearly as well off, ones who can’t afford a child and don’t have the state governor as a grandparent.

Ms. Palin, you’re not teaching anyone. And, if anyone does learn from you, and decides not to become a teen mom, they aren’t that bright to begin with and are destined to screw up in other walks of life (that is, unless someone comes forward on TV and says “Don’t be like me!”)

However, for those few select people, Gunaxin would like to take this opportunity to present to you, Ms. Bristol Palin: