Media > Celebrities > Bruce Campbell: A Tribute to “The Chin”

Bruce Campbell: A Tribute to “The Chin” 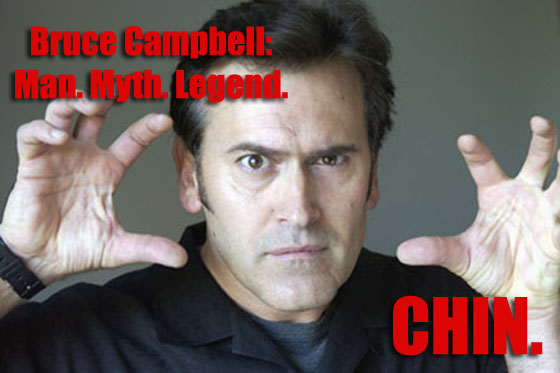 Bruce Campbell is an actor and author from Michigan, best known for his role in the Evil Dead films and, more recently, his role on the hit television show Burn Notice. It’s also believed he’s a demigod whose trademark strong jawline and chin may or may not influence the tides.

Bruce (or Brucio or The Bruce, as we like to call him) first came to fame in the low budget Evil Dead, directed by his pal Sam Raimi. That was quickly followed by Evil Dead 2, which was less of a sequel than it was a hilarious remake of the original, and finally The Bruce strapped on the chainsaw one last time for Army of Darkness, spitting endlessly quotable lines like “Hail to the king, baby” and “This is my BOOMSTICK!” Both of these lines, by the way, are highly encouraged during the course of a sexual encounter.

For whatever reason (we’re going to go ahead and blame politics, or aliens, or maybe highly political aliens) The Bruce has never really risen higher than the B-List, and even that might be a bit generous, despite his legions of devoted fans and always hilarious turns in smaller roles, such as the Spider-Man series. He’s the king of the B-movie, and one of the greatest “That Guys” working today. We’re just thankful that, after failed but cult favorite TV shows like The Adventures of Brisco County Jr., he’s finally found himself a role on the hugely popular and successful Burn Notice, in which he plays an older, drunker, hornier and awesomer version of the show’s hero.

But he doesn’t just stop at being an actor, demigod, destroyer of worlds and spinal surgeon (we’re assuming); he’s also an author. Bruce has penned the books If Chins Could Talk, a memoir chronicling his life and career, and Make Love the Bruce Campbell Way, which is a fictional story but sounds like a pretty damn good instructional manual.

And don’t forget, long before Isaiah Mustafa came along pimping Old Spice, who did that company turn to in order to get red-blooded American males to buy deodorant? That’s right, it was The Man Who Would Be Ash, who gave us this:

…and there’s also this one…

Frankly, we’d buy just about anything from Bruce Campbell. That includes aluminum foil condoms, though we’re not sure those are in high demand (yet).

We leave you with one more display of epic Bruce Campbell awesomeness, all from the hilarious (and intentionally bad) movie My Name is Bruce: