Sports > Baseball > Is Bryce Harper Worth the Wait?

Is Bryce Harper Worth the Wait? 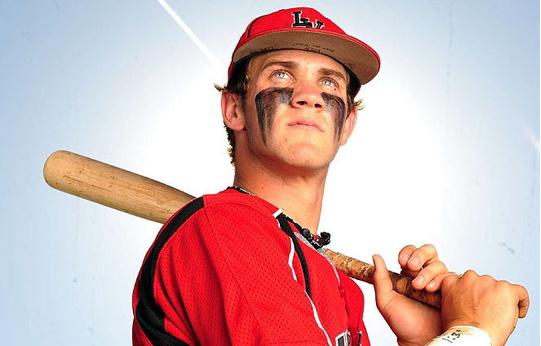 Amidst the hoopla of Derek’s Jeter’s American Flag uniform and the All Star game selections, Washington Nationals uber-rookie Bryce Harper has been promoted to the Double-AA minor league baseball playing for the Harrisburg Senators.

In his first game with the Senators, Harper didn’t disappoint as he went two for three, including hitting his first ever pitch seen at the double A level for a solid base hit. The crowd was a sell-out and Harper lived up to expectations at least during this jump.

Before the 2011 MLB Draft, most people knew of Bryce Harper as the mythical figure created by Sports Illustrated who was set to take the throne as the next Mickey Mantle or Ted Williams. He was known as the guy who hit the ball so far out of a ballpark, satellites orbiting the Earth were taking pictures of his greatness. For the Washington Nationals, who at the time already had one blue-chip prospect in Stephen Strasburg, this was like finding oil under your house and then finding an original copy of the Declaration of Independence in your attic.

After Harper was drafted, it was confirmed that he would not be playing Major League Baseball this season but that didn’t stop fuel from being added to the fires of fans wanting to take a glimpse at the next big thing to come along. Every stop so far on his Minor League journey has had sold-out venues and intrigue from every facet of the media.

One of the questions that are ultimately asked of the overall number one pick in any sports draft is, “Can you live up to the hype?” In Major League Baseball, many top selections fail to make a dent in the league and some are never heard from again. Harper could be the latest Ken Griffey Jr. or Darryl Strawberry to storm the league at large or he could flame out like Matt Bush or Brien Taylor.

So far, Harper has lived up to the hype during his minor league stint as he’s batted above .300 and hit fourteen home runs on the single-A level. Opposing pitchers weren’t in the greatest of moods when they had to face him and he showed that he didn’t like them much either after a video surfaced of him blowing a kiss to an opposing pitcher after he had hit a home run. Harper is a player that you either love to like or love to hate; similar to how Lebron James entered the National Basketball Association as a rookie. He is a polarizing figure to say the least and he might be what Major League Baseball needs.

It will be exciting to see in the next couple years or so to see where Harper is going to end up on the spectrum of Major League Baseball talent but I do know that he will be worth the wait.