With the lockout lifted, all is right in the world of professional football. Preseason tilts began this past weekend and before we know it, the games that count will be kicking off from 35-yard lines across the land. That’s all well and good, but for those of us that participate in fake football, i.e. fantasy, the only thing we give a turd about is drafting the most badass squad this side of the “Mean Machine.”

Now, you can rely on the hordes of so-called experts to steer you toward fantasy glory, but I personally find most of them to be contradictory when it comes to handing out advice. One minute they’re telling you to stay away from Mike Vick in the first round, the next they’re singing his praises as an absolute steal at #11. How does that help you build a stud-filled roster of future champions? It doesn’t.

So, mute the guy in glasses on ESPN and stop reading the Italian dude over at NFL.com. They mean well, but they’re too nice to really help your cause. We here at Gunaxin have no problem getting our hands dirty. Stop whining about who to take with the top pick and listen up. It’s time to grow a pair, buckle down and pay attention to the No BS Fantasy Football Draft Guide. (Note: I play in 12- and 14-team leagues only. If you botch a 10-team draft, you need to stop playing fantasy football immediately.)

I don’t care if you’re moving into a Tibetan monastery tomorrow, the earliest you should be drafting is August 28th, after the third preseason game. Ideally, you’d be better off waiting until Labor Day weekend. The majority of key starters generally ride the pine after Week 3 of the preseason, but that doesn’t mean the number four running back or slot receiver you drafted in the tenth-round won’t break a foot in the meaningless exhibition finale. For those of you who already drafted, you get what you deserve with Arian Foster’s hamstring, Chris Johnson’s holdout, Marques Colston’s knee, Jeremy Maclin’s mystery illness, Mikel Leshoure’s ruptured Achilles, Ryan Mathews baby-sized muscles and the spate of injuries that will inevitably occur between now and Week 1. 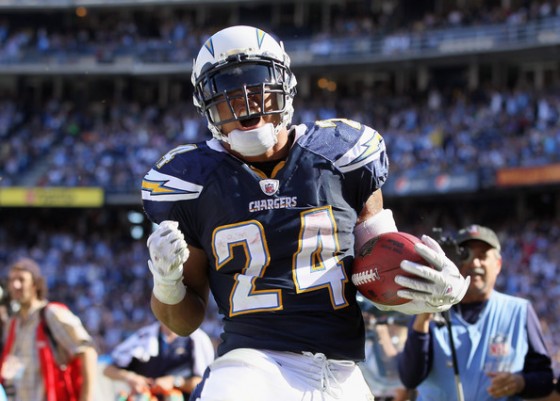 I think his pacifier fell out.

Why are you selecting a QB in round one?

I owned Michael Vick last year so I experienced first-hand the drunken giddiness of watching him destroy defenses to the tune of 30-40 points every week. Did I draft him? No, I plucked him off the free agent scrap heap like most people. In 2008, I won a fantasy title platooning Shaun Hill and Tyler Thigpen. In 2007, I reached the mountain top with Ben Roethlisberger, who I nabbed in the 8th round. See the pattern? Draft Vick or Aaron Rodgers or Drew Brees in the first two rounds if you must, but prepare to be screwed at running back and receiver all season long.

A glut of experts will threaten to burn you at the stake if you don’t land one of the “Big 7” quarterbacks. Well, they’re insane. Any combination of Matt Ryan, Big Ben, Eli Manning, Matt Stafford, Sam Bradford, Kyle Orton and Josh Freeman will get the job done. While everyone else is scooping up Rivers and Peyton, load up on backs and receivers. Having superstars under center looks sexy, but it doesn’t automatically translate to hoisting the trophy at season’s end. Remember: most ( normal) leagues start only ONE signal caller, two backs, two or three receivers, one tight end and/or a flex. That’s six, maybe seven positions that need to be filled besides quarterback. The numbers never lie. 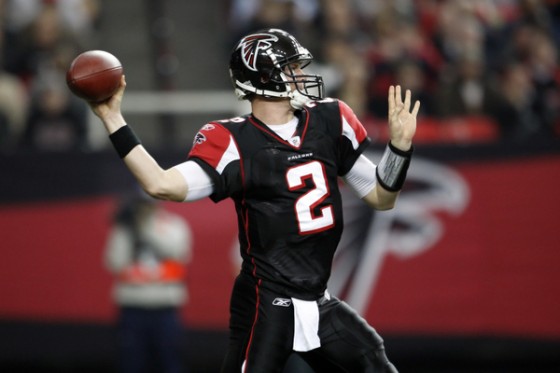 If you take a Defense and/or Kicker before Round 12, you’re retarded

This is where the experts and I agree, and yet every single year a couple nitwits jump on defenses in round six, then turn around and peg a footie in round seven. These mentally challenged clods must be under the impression they have to fill out their entire starting lineup before padding the bench. Either that or they resemble this memorable moron:

These dim bulbs can also be found doing this frequently throughout the draft:

Whatever the case, don’t forget to laugh loudly at these mouth-breathers when they flush their championship dreams down the toilet, and also thank them repeatedly for aiding in your quest to achieve fantasy greatness. 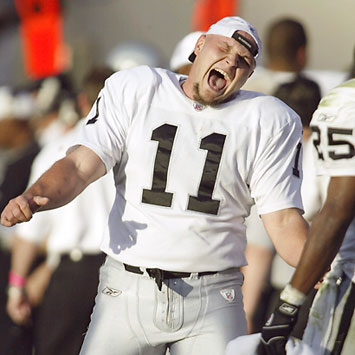 Let someone else catch the sea bass.

All-Day is a phenomenal football player. On that point, there’s little debate. But is he a phenomenal fantasy back? The short answer is, of course, asshole. Before you call for my head, let’s compare him with another stud back perennially chosen after AP in the first round.

That roughly averages out to 15 more yards per week and one additional touchdown every eight games for Peterson. However, when you take into account MJD officially started only 33 games during that span compared to AP’s 54, then the Jaguar looks just as good if not better than the Viking.

I’m not suggesting you take Maurice instead of Adrian, especially when you consider the former’s balky knee. I’m simply positing that the latter isn’t as awesome as you might think. By the way, Rashard Mendenhall, who is going at the end of round one, had 25 fewer yards rushing and scored one more touchdown than AP in 2010. Just sayin’. 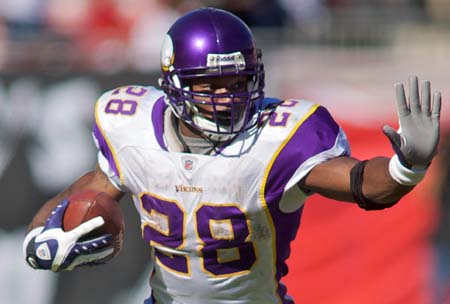 There’s no such thing as sleepers

By the time you’re done absorbing all the preseason fantasy information from websites, magazines and radio shows, you’ll have heard every single expert’s list of “sleepers.” And these lists will probably look very similar: Ryan Williams, Mike Thomas, Roy Helu, Greg Little, Jimmy Graham, etc., etc. The truth is, the concept of sleepers is BS. If everyone else in your league reads the same shit you do, then you’re not going to spring a surprise in round fourteen by taking Alex Green because the owner two spots ahead of you just grabbed him in the thirteenth.

Instead of banking on sleepers (most of whom will be busts anyway), identify solid players you know will be under most owners radar and snatch ’em up to round out your bench. Guys like Mike Tolbert, Jason Snelling, Jamie Harper and Isaac Redman hold significant value if they become full-time starters. Same goes for Mario Manningham, Jason Avant, Jordy Nelson and Torrey Smith. Ignore sleepers and do your homework. It will pay off. 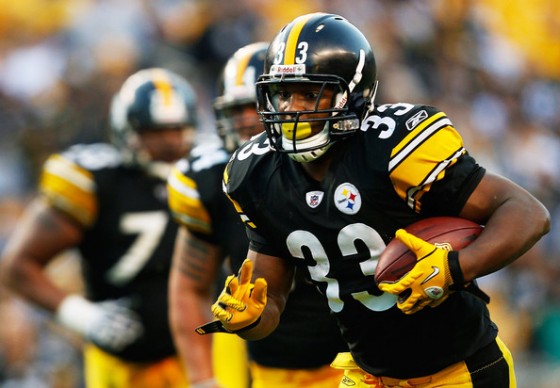 One Mendenhall torn ACL away from being the man.

Due to the NFL’s shift toward a passing league this decade, the number of quality wideouts is at an all-time high. If your league requires you to start three wide receivers, you better make sure you get three good ones in the first seven rounds. I’ve employed the strategy of going RB-WR-WR in the first three rounds with great success in recent years. Last year it netted me Chris Johnson, Calvin Johnson and DeSean Jackson. Then I snagged Mike Williams South in the 11th round. Toss in Arian Foster in the fourth and Mike Vick as a waiver wire claim and you have a championship roster with zero weaknesses.

I count up to 30 pass catchers capable of posting consistent numbers on a weekly basis. And you don’t have to spend an early pick to get value. A trio of Vincent Jackson, Santonio Holmes and Percy Harvin could probably be had in rounds three through five and serve you well throughout the season. Wait too long and you’ll end up with Pierre Garcon, Lee Evans and Jerome Simpson. No offense to those gentleman, but yuck! 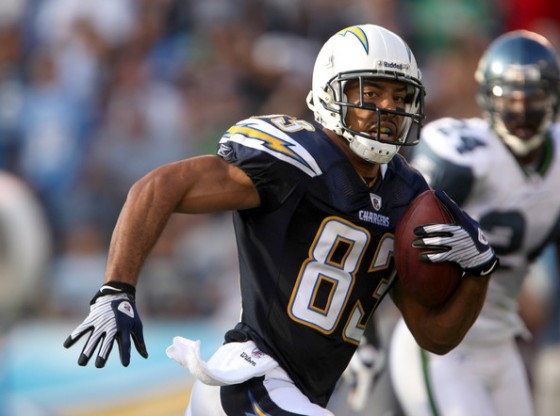 Go with risers, not faders

Like the ‘no defense/kickers early’ rule , drafting guys on the way up instead of the way down seems like obvious advice. That being said, every year I enter a draft and watch broken-down hasbeens come off the board with regularity. I love Derrick Mason’s reliability, but I want Jacoby Ford’s explosive potential instead. Ricky Williams is a physical marvel, but Daniel Thomas has tons of upside. Donovan McNabb has had an excellent career, but Sam Bradford possesses more skills. You get the point. Leave the graybeards alone. 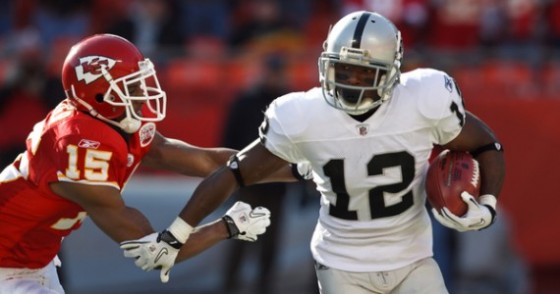 Trust me, flip-flopping on which strategy to use or which number one receiver to choose will get you a one-way ticket to draft day hell. If you love Jamaal Charles at number three, then get him. If you subscribe to the stud running back theory, then roll with it. If you can’t decide between a pair of tight ends, grab the one with the better quarterback. Keep it simple and for Pete’s sake, have your BS detectors at the ready.