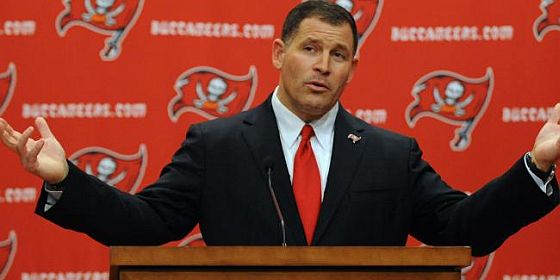 New Tampa Bay Buccaneers (and former Rutgers) coach Greg Schiano is hardly known for his laid back personality, and it appears that he has passed that attitude on to his son. Joe Schiano, a 16 year old linebacker for Tampa’s Berkeley Prep received a six game suspension for aiming profanities at an official during a recent game. The Tampa Bay Times recounts the incident:

“As the play was blown dead there was action to my right that I did not see the entire play where a Berkeley player went down. At that time he returned to his feet saying something about did you see that hit? I was still occupied with gathering the info of the late hit out of bounds. At that time he look at me & said ‘What kind of (expletive) call was that?’ At that time the next flag was thrown for his ejection.“

While this doesn’t rise to the level of his father’s combative history, it’s still inappropriate behavior for a high school athlete. We look forward to reading more about this touching father and son bond in the future.