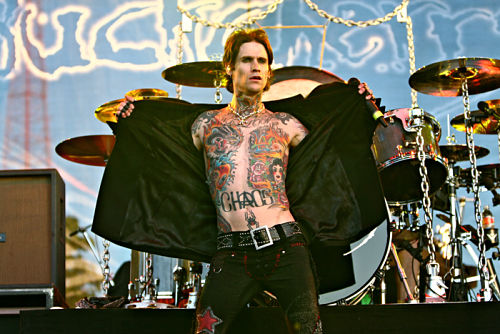 Rock stars are never in short supply of wild tales to spin. Be it female conquests, drug and alcohol fueled benders or run-ins with the law, life on the road can produce some truly bizarre stories. Like the one Buckcherry lead singer Josh Todd told on Sirius/XM’s The Opie and Anthony Show yesterday. When the subject of male genitalia came up, as it often does on the show, Todd chimed in with this humdinger:

I signed my first dick last year… In Europe, we were at a signing and this kid was like, ‘Hey, will you sign my dick?’… ‘I’m like, no man, I’m not signing your dick,’ and he walked off near all his buddies and they were all hammered and kept hanging around, and I’m like, ‘Alright dude, this is the deal, you take it out and stretch it out and I’ll sign it, but I’m not touching it…’ So, I’m thinking this guy has to have a big dick or he wouldn’t be like, ya know, sign this… but he didn’t. *rimshot*

Odd, hilarious and only slightly gay because he didn’t actually touch the member. Plus, he also signed a chick’s vagina, which balances out the homo. Anyway, Buckcherry is currently headlining the winter leg of the Jägermeister Music Tour, along with Vinnie Paul’s supergroup Hellyeah.