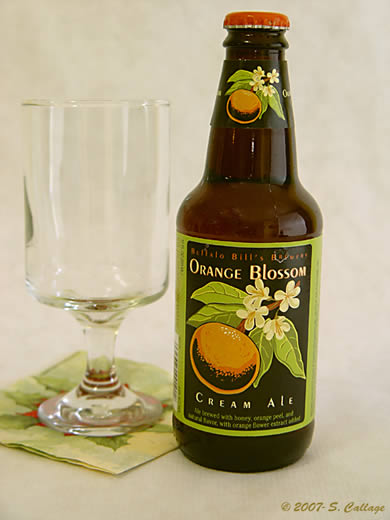 It’s rare that I stumble across such a stunning beer as this one is visually. It’s light orange, beautifully clean, and as close to looking like a breakfast beverage as you could, conceivably get, from a brew. It effervesces like no other beer I’ve opened in a while, too. It was so oddly fizzy that it caught me off guard as I almost wondered if there was something amiss! The head is light and dies off quickly, but that’s nothing unusual for an Ale of the fruitier variety, I’ve noticed. Taking a long inhalation with the beverage safely in my Pilsner-style glass and I’m immediately reminded of a Creamsicle! Wow! It completely brings back hot summer afternoons frequenting the ice cream truck. Very nice.

Even with the orange flavor being more purposely to the forefront, it’s almost overshadowed by the honey. I don’t know what it is with honey being in the choices I’ve made lately, but believe me, it’s not a conscious decision. Don’t get me wrong, there is nothing wrong with it at all, in fact having honey -one of beer brewers original ingredients from thousands of years ago- harkens back to ales of yore. Or, even a mead, which, in all actuality, is what this selection ultimately reminds me of.  The mouth feel is purely Ale in nature with its characteristic light richness, and it’s chased quite beautifully with the citrus rind finish and the pleasantly cloying honey/spice notes that hang on for a good bit of time. This is really a nice, crisp, easy-drinking beer that would -though I hesitate to admit it- go perfectly with a slice of orange in the glass, much akin to an Oberon or Blue Moon. Pairing with food you’d do well with pork, grilled chicken, or, as I’ll often suggest, as the ‘white meat’ marinade. Outstanding.

Rating: * * * *
One of those great collection of beers that matches like a marriage with a summer evening under the stars.