Bugs: 14 Good Reasons to Stay Inside 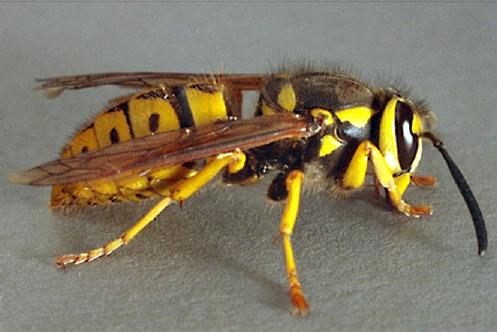 Hey kids, it’s late spring and that means: BUGS! I am no fan of bugs and, in fact, would just as likely stomp the shit out of one and or run away screaming like a five-year old girl (in the case of a bee). So, why not make these annoying critters into a list of sorts, I actually asked myself? I couldn’t think of a good reason why not, so, here goes. Oh, and just in case you enjoy looking at insects rather than not even being in the same time zone as them, I borrowed these great images from right here: What’s That Bug? Go there, look around, and enjoy the abundance of creepy-ass vermin we have here on Earth. GO! Oh, and enjoy the list!

This bug is related to the dragonflies and damsel flies. Have you ever seen the humongous eyes on these damn things? They look as though thy have some higher form of intelligence. They scare the shit out of me what with their ‘perfect wings’. Oh, and a type of them has been around since the dinosaurs. They’re gonna take over, I just know it.

Evidently this is a cricket. I don’t care what scientists are classifying this as, it’s creepy, nasty, and CRAWLING ALL OVER ME!

Nope, I have no damn idea what this thing is, so I’m going to make it up: This is the larva of a lizard that lives on the moon. They have a nymph period of six years and eat monkeys. I got nothing else, but I have never heard of a thrip.

I used to find these ancient buggers in my grandma’s basement years ago. They’re harmless and just scuttle all over the joint looking like a cross between some kind of ocean dweller and something out of a sci-fi flick. Apparently they’ve been around since the dawn of time, so that’s pretty cool.

Classified as the biggest beetle on earth, these guys can weigh in at around 2 pounds. Good Lord! Anyway, at the Natural History Museum in Chicago they have this huge display of nearly every insect in the world and this guy is just so frickin enormous it looks a little like a football with legs. I’d guess you’d have to throttle it with a hammer or something. Oh, and they fly. Ugh…

Have you all seen a cicada? It’s basically a huge fly that serves to do nothing but hang around every 17 years and make an ear-splitting chirp. This giant wasp, on the other hand, kills them. And, while it’s doing that, it lifts them off the ground and takes them to its burrow to consume them slowly for days. A giant wasp. That eats bugs twice its size. There is no point in ever going outside again. Ever.

Looking at that picture, you would think that this was some kind of deranged deer. Praying mantises are, apparently, great bug hunters and can be leashed to the end of your bed to rid your room of mosquitoes and the like. Or dive on your face and chew out your soul. Either way.

The existence of this guy is to simply survive in your pool in the hot summer and chop off your toes. Fun.

Those same damn scientists claim that this bug’s giant, pointy mandibles are harmless to humans. I do NOT believe them.

Sounds like a barbecue mishap, when in reality, it’s just a really disgusting insect that is also, somehow, a Crustacean. Yum. Dinner.

I do not care if this is technically an arachnid, technically harmless, or full of precious diamonds. Keep it the hell away from me.

The more I think about it the more I purely believe that all bugs are from a Hell on an entirely different planet. What is up with this thing?

Here’s some Japanese Hornets laying waste to some bees. Awful

Hey look! It’s one of those GIGANTIC Centipedes!