Humor > Images > Bugs Bunny In Drag: Sexy or Not?

Bugs Bunny In Drag: Sexy or Not? 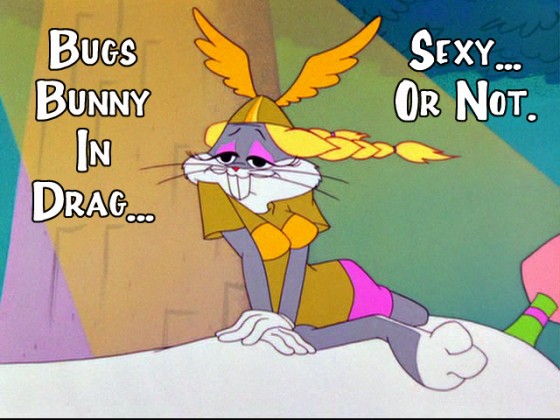 Us good folks at Gunaxin, we like women.  Perhaps you’ve noticed.  And who better to represent what we love about the ladies than somebody who is A) male, B) not a human, and C) completely made up?

Yes, we’re talking about Bugs Bunny, in case this article’s title didn’t completely give it away.  For well over 70 years, he has entertained and inspired us with his whip-smart sarcasm, street-smart attitude, endless stream of cross-dressing, ingenious methods of escape from certain danger, and…

…what?  You’re stuck on the cross-dressing part, aren’t you?  You can’t and won’t move on with your life until we’ve explained that one further, is that it?  Alright, fine.  See, while he may not really partake in it anymore, Bugs spent the first few decades of his career doubling as his own girlfriend.  Dozens of his shorts featured Bugs, at one point or another, dressing up in women’s clothing, and quite elaborately so.  Usually he did this to evade the wrath of whoever ‘cwaved wabbit stew‘ that week and, naturally, it always worked.  Bugs always escaped with his life while his would-be captors were left wondering whatever became of that buxom beauty who oh-so-briefly stumbled into their lives.

And really, can you blame them?  Well, sometimes you could.  While Bugs could often fill out a dress with the best of them, he didn’t always pique our fantasies.  He is, after all, a furry gray rabbit at the end of the day.  Is She-Bugs worth stalking over Facebook in an overly creepy manner?  Below, we review fourteen outfits to determine once and for all if Bugs Bunny was truly a hot drag-queen or not.

Tough one to start off with, as Bugs has apparently chosen to disguise himself as a nine-year-old teeny bop fanatic.  We would say s/he’s crushing on Justin Bieber here, but we would prefer our articles stay relevant past the three-month mark.  So feel free to fill in the blank with whatever ten-year-old pop star is burning up the charts during whatever week you’re reading this.

Back to Bugs; we just can’t say much here, because he’s dragging it up as an underage girl.  We may be pigs who get our jollies off of starting at pictures of a male cartoon rabbit wearing women’s clothing on far too many occasions, but we do have standards dammit.

Now this is more like it.  With the hears slicked back and tied up with a pretty blue bow, Bugs actually does pass as a fairly sexy female here.  That is, as long as you ignore the gigantic buck teeth that stick out like angry fingers in your face.  No man, even one of those freaky body-piercing people with 85,000 piercings all over the place, could handle the pain of getting his bits chomped down on by those teeth.  Then again, if Sarah Jessica Parker can get away with it, why not Bugs?  He can probably fill out that halter top better as well.

Well, now Bugs is just pissing us off.  He’s dolled up as a perfectly serviceable southern belle, adorable in every way save for the need to shave every inch of his body.  And he goes after Elmer Fudd?  It really matters not that he’s doing it so he doesn’t get shot at; Elmer’s a borderline retard and he’s not going to hit his target regardless.  He never does; therefore, we’re forced to conclude that, much like that hot chick from The King Of Queens who gets hot and bothered by Kevin James, Bugs is an attractive woman who gets turned on by ugly guys.  And while you might think that would make us feel better for our chances with she-Bugs, it actually doesn’t.  If you can imagine.

Hey Bugs, you know most people don’t wear nightgowns in the shower, right?  Alternately, they don’t wear shower caps to bed.  So unless you sleep in the shower, with the water on, then you’re not making any sense with this disguise.  We expected better…

Oh, wait a second.  Whoops, sorry Bugs!  Caught you in the middle of  dressing up, huh?  You weren’t ready; our bad.  Go on and finish yourself up. We’ll give you time.

OH JESUS. Do you need even more time to get ready?  Because this is just scary.  This reminds us of drag day at college, when the frat boys would smear cheap lipstick on their face and put on a half-assed dress they “borrowed” from a random drunken sorority girl, and they inevitably looked scarier than any Halloween costume they could’ve come up with.  Please wear something else before you start to make babies cry.

Thank you, much better.  This is a fine piece of drag, as not only does Bugs look like a very sweet older lady, but somehow his legs appear far more shapely than before.  Usually, his skinny little rabbit legs are twig-like, aside from the gigantic feet; but slap some nylons on and suddenly his gams have very noticeable definition.  Also, it can’t be ignored that his feet are suddenly much more tiny and dainty than usual, so perhaps Bugs has magic powers stemming from inside that dress.  Either that, or the shoe-store dude just has the biggest nose in all of history.

Everyone at the Gunaxin office is clutching our junk for dear life; are you?  Yep, we thought so.  What a nightmare woman with a nightmare dental plan; no wonder the Tazmanian Devil was always so angry.

Hmmm, gotta go with a thumbs-down on this one.  Yes, the dress if frilly and cute, and the shoes definitely make his eyes dance, but it’s still clearly Bugs.  No makeup, no exaggerated lipstick, not even an effort to tie his ears back.  Basically, he just slapped a dress on and that’s not enough to fool people.  If you don’t believe us, just try it.  Slap on a random dress and try to seduce the first dude you see.  Go ahead, we’ll wait.  Just remember, we’re not rich enough to pay your bail and/or hospital bills.  But we might send you a get-well card.

Nope.  The whole mermaid thing is overrated anyway, and now that it’s a mer-bunny we’re talking about, it starts to get really weird.  And what exactly is Bugs covering up with that flower bra?  it doesn’t even look like he had the decency to stuff toilet paper down them first.  So yes, no chest and (literally) no legs? Sign us up!

Well, there’s definitely nothing wrong with the 50’s housewife look, so we’ll give this one a thumbs up.  Though it must be said: anybody with eyes that big, and eyelashes almost the same size, might be an alien out to entrap us all, or else a clever rabbit in disguise.  Either way, tread carefully.

Don’t feel bad if you don’t remember this one.  This was one of Bugs’s banned cartoons, where he single-handedly won World War II by outwitting an entire nation of just the stupidest Japanese stereotypes you could ever hope for.  Here, he seduces a slant-eyes sumo wrestler with the most deformed-looking legs and feet of all time.  You  physically could not stand if you weighed 500 pounds your legs were that short and stubby.  Not to mention the part where your big toes stick out so far, you might as well be web-footed.

But this isn’t about the racist stereotype, this is about Bugs.  And Bugs just looks plain creepy here.  The stereotypical geisha look can be exotic and hot when done right, just not here.  Perhaps if Bugs had bothered to slap on some white powder for his face, he would’ve gotten a thumbs-up.   Maybe he knew this cartoon wouldn’t survive past a certain year and just didn’t want to bother with the effort.

D’AWWWWWWWWWWWW.  Though we do have to question the innocence of somebody who basically wears their dress like an ass-less hospital gown.  We also question the intelligence of anybody who sees that tail and doesn’t immediately think something’s up…

Well, this get-up’s kind of hot, though the fact that it’s from The Looney Tunes’ version of Barber of Seville knocks it down a couple notches.  Knowing what a woman can do with large scissors, especially if you piss her off by attempting to shoot her and cook her into stew, makes us cross our legs just a little bit tighter.

It’s the famous opera scene; of course we’re going to use this one to close things up.  Bugs pulled out all the stops and looks legitimately good here.  He stuffed his bra, shortened his skirt, hid his ears and tail, and didn’t turn into a movie monster with the makeup.  Definitely his best look of all.  On a side note, that is the fattest horse of all time.  How many wreaths of flowers did that thing eat before they could finally snap that picture?

Final tally: Bugs Bunny looks hot 6 out of 14 times.  That’s a scientific number, by the way.  You can quote it in a textbook.