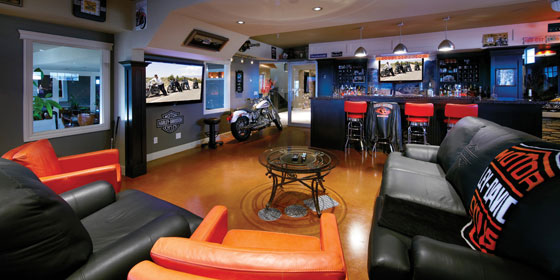 Just a couple of years ago the term “man cave” wasn’t something that I had heard before but now it’s an important aspect of my life. Let me quickly explain what a man cave is, well my perception anyways. A man cave is an area of solitude for men, it’s where a man can either work or play in peace without the interference of any female influence. A man’s cave can be any size, whether it’s the corner of a room or a whole building, as long as it’s his.

A man cave doesn’t literally mean it has to be, or look like, a cave. As long as it’s a space where the man can relax and not worry about any interruptions. 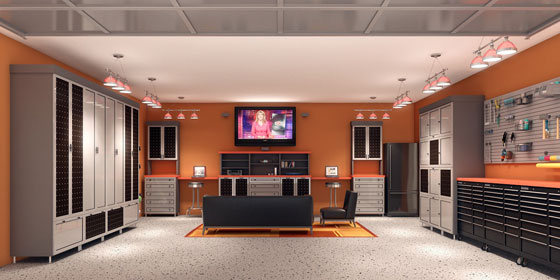 As I said before, man caves are an important aspect of my life, why? Because it’s my dream to create the perfect man cave, even if it takes me years upon years. At this point, I assume you’re wondering how amazing my man cave looks, right? Well….so far it’s a poor attempt, man caves can be expensive so I’ve not been able to fulfill my plans and I probably will never be able to.

Even though I’ve not managed to create much of a man cave, designing it and coming up with ideas is still an enjoyable part of my life and I’m going to share that enjoyment with you. I’m hoping that you have more money than Richie Rich, because this is going to cost you. 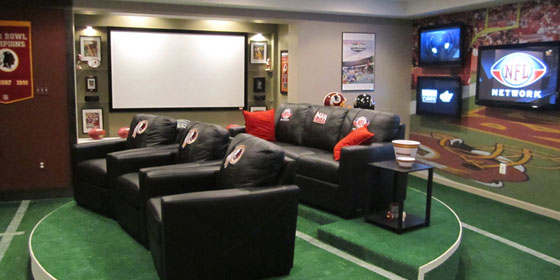 Clearly the most important part of building a man cave does know how much space you have, it’s no good buying an 80” TV to go into a room the size of cupboard, so be realistic. There are 3 important features of a man cave

So when scoping out the size of your room, be sure to take these into account. If you’re planning on having other men in your cave then don’t be stupid and buy one chair as there’s nothing worse than dragging in a kitchen chair to ruin the theme of your room, think ahead. TV wise, make sure you have enough space for a good TV unit (unless you plan on wall mounting) as you don’t want to see cables everywhere. Lastly, movement, being cozy is a good thing however when there’s several of you, it gets a bit cramped and stuffy. Make sure you leave enough room to move around, have a wander, and play some pool.

As for your theme, pick one and stick to it. Your first idea will most likely be the idea that’s been secretly hiding in your head for years. Popular themes are movies, sports, cars, gaming, or even a casino. 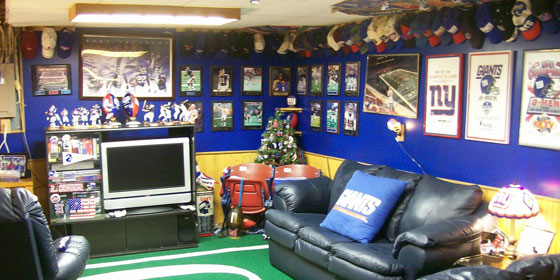 The perfect man cave would be one without a budget, but unfortunately for most of us, that’s an unreachable target so be smart with your wallet.  A decent budget for a standard man cave would be around $6500. This will get you a sweet entertainment setup, sofa, fridge and cool gadgets, but in all honesty if you can go higher, then do it. 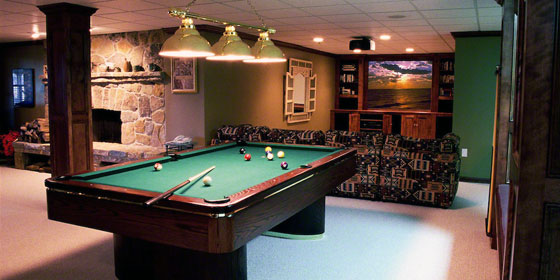 Steps 1 and 2 are very good advice and you should follow them, but I know what you’re thinking, you just want to see some awesome gadgets to stick in your Man Cave. Buying online is the best option as it will save you some money, but if you get the chance to see a product in person before you buy it then I advise you do. You don’t want to open up your first Man Cave accessory only to find out it’s nowhere near as good as you thought it would be.

So, gadget time. I’m going to show you 2 products for the main Man Cave categories. I’m going to have two designs, one under $6500 (Realistic Design) and one which will be, well, significantly more (I Wish Design). 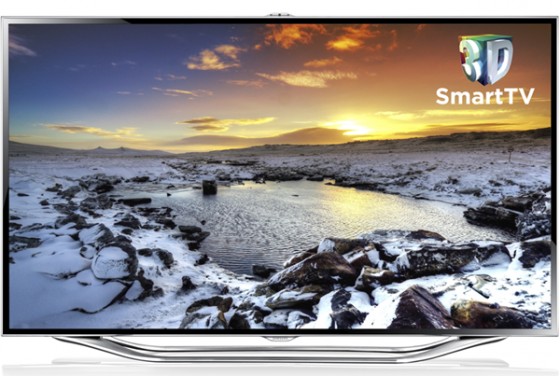 If Cheryl Cole and Mila Kunis collided at high speeds and for some reason turned into a TV, this would be the outcomes.  This TV is stunning, in all the ways it possibly could be. At 65” Inches this TV is destined to be put up on the wall and be enclosed in 7.1 surround Sound. The TV uses active 3D technology which is basically the bee’s knees and the Smart TV functions allows you watch TV over the internet or just videos of cats falling over on YouTube. 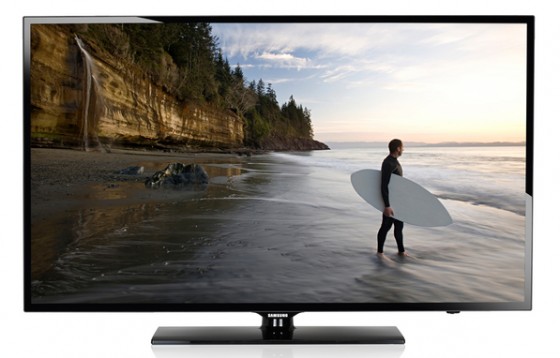 Samsung are once again clashing sexy women into each other and producing Televisions. The Samsung UE60EH6000 (catchy name right?) isn’t as higher spec as the TV mentioned above, it doesn’t have 3D capabilities nor is it as big. However, this Smart TV will still be better than all the other TV’s you have ever sat in front of. 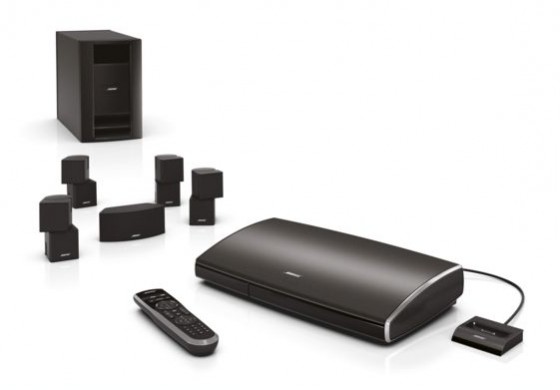 The Bose V35 5.1 home cinema system is one of the best surround sound systems you can buy. The clever ADAPTiQ® technology customizes the setup to suit the acoustics of your cave, so in layman’s terms, it’s awesome buy it. With 4 HDMi connections, you’ll be able to plug-in all of your devices meaning you won’t need to mess around with cables.

Not only is this surround system great value for money but it’s also a Blu-ray player, and has Smart TV functionalities. This means you don’t need to buy a Blu Ray player which leaves more money for other things. Pioneer is a very good brand and their BCS-323 system lives up to this name. Producing a staggering 1100 Watts, this system will have you jumping in your seats. 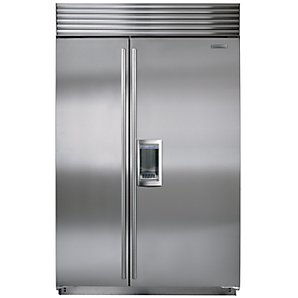 In all honesty, even though this is in my I wish design, it’s only because I’d like to be able to have enough money to spend $22,000 on a fridge. Other than that, I can’t see why anyone would spend that much. However this fridge/freezer is pretty awesome, it looks cool (get it?) and it would suit literally any theme.

Using NASA technology, this fridge ‘Scrubs’ the air inside to remove any bacteria from its 805l capacity. So I suppose having a fridge with NASA technology is another reason to spend $22,743 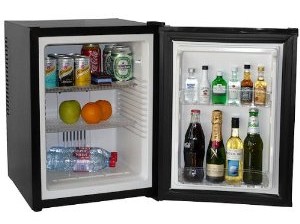 This fridge may seem a bit boring, that’s because it is. All you need a fridge for is to hold your Beer and Yorkies. This saves you some money to spend on the awesome thing coming up. 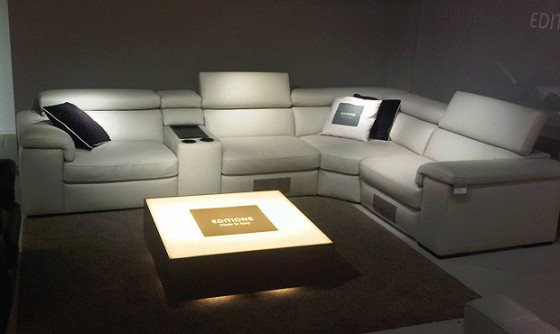 Remember that scene in Friends when Chandler and Joey first get their awesome Recliner chairs? Yeah? Well this Cinema sofa will make their chairs look like stools. The Fabio Cinema Sofa provides ultimate comfort for you and several of your buddies; it also provides comfort for your drinks and even your iPod! That’s right, you can play music from your Apple device through your sofa, a sentence I never thought I’d say.

This sofa is extremely comfortable and even though it doesn’t have iPod capabilities or as many seats as the Fabio does, it’s still a brilliant sofa. There is a table hidden under the armrest which is great for your drinks, remote etc. This sofa is slightly expensive, but it’s definitely worth it. 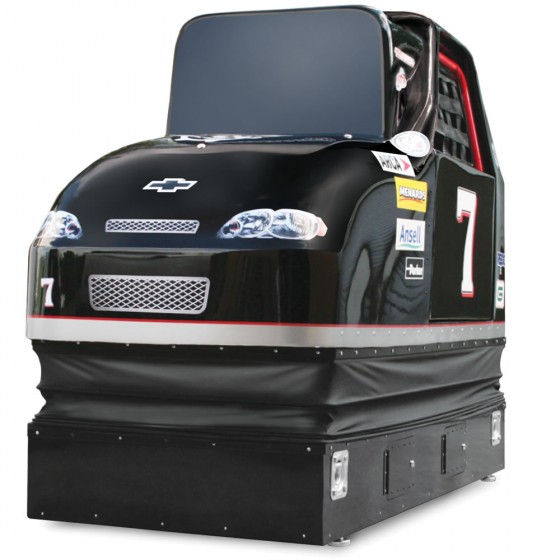 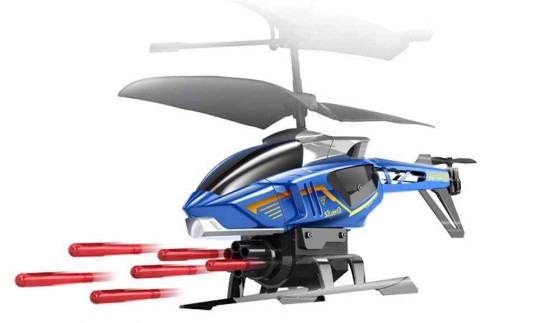 Obviously this gadget doesn’t quite live up to the racing simulator, but it’s still pretty awesome. With this RC helicopter you can take to the skies and fire missiles down on your friends for mis-behaving in your cave. 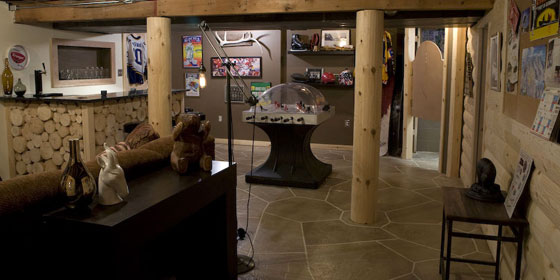 So that leaves us $1216.45 to spend, now is that going to be spent on another awesome gadget or a second TV? No, it’s to spend on your wife, because who are we kidding? You’re going to need permission.