Sports > Other > Bulletball: The Little Game that Couldn’t

Bulletball: The Little Game that Couldn’t 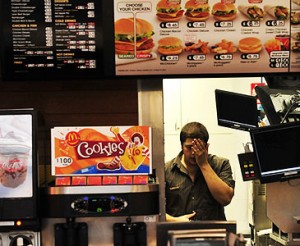 Let’s face it: the American Dream blows. As children we’re told that anything is possible if we simply put our minds to it and do the work. Then we find ourselves salting trays of Filet o’ Fish and wondering what went wrong shortly before throwing our lives away and forming the best Limp Bizkit cover band in the tri-city area.

The truth is that success isn’t always a matter of hard work. Other factors can easily alter your fate, for better or worse, and you simply have no control over them. For example, let’s say you want to play professional baseball. You spend years harnessing your craft, distancing yourself from others while you’re adding the right amount of the Pittsburgh Pepper to your slider. By your mid-twenties you’ve lost contact with everyone you’ve ever loved, but dammit, you can pitch like no one’s buisness. Then some Japanese guy invents a baseball playing robot, mass produces said robot and replaces all humans in the MLB with cold, unfeeling machines. Way to go, asshole. You wasted your life.

Now let’s pretend you’re an inventor with big aspirations. If you fail to reach your goals after, say, twenty years, should you throw in the towel? Most people would say “yes,” but most people aren’t Marc Griffin, creator of Bulletball and part-time depressing guy.

The image to the left is Marc giving a demonstration of his game. A quick run down: two players on opposite sides of the table hit a ball back and forth with their hands and forearms, scoring points when the ball crosses their opponent’s side. If this sounds at all familiar it’s because Bulletball is eerily similar to Pong, with the only major differences between the two being a pair of side rails and the sale of several million units. Marc would have probably dwindled into obscurity if it hadn’t been for two things: the BulletBall rap (warning: this will make you sad) and an appearance on American Inventor, where his dreams of making Bulletball an Olympic Sport were promptly crushed by people with experience in the field of American inventing (warning: this may make you sadder).

Here’s an analysis of why, despite Marc’s sunshine demeanor and Kim Jong-il tracksuit, Bulletball should be a tremendous failure based on the revelations made in the above video and the many musings of the internet populace:

“My game is going to be an Olympic sport.”

You’ve got to give Marc credit: he’s set the bar on this Bulletball thing pretty high. But the Olympics? Do you honestly think people will train for their entire lives for a chance to play on the Chinese Bulletball team? To prove this point, here’s a list of words that describe most Olympic sports:

Please note the distinct lack of overlap between the two. We’re not saying it’s an impossible dream, but if the Olympic Committee has yet to make use of any rotor sport its doubtful they’ll need a second version of ping-pong.

“We were sitting there, drinking wine.”

Think for a second: how many successful buisness ventures begin with this phrase? Do you think that guy from Excite Bike hammers down wine coolers before hitting the track? Of course not. You’ve got to be sober to hit all those ramps. Unless your brilliant revelation is “Drink less alcohol,” you should probably avoid making life-changing decisions while inebriated.

Our first reaction to this was “Marc Griffin is a terrible liar.” Then we realized that he wasn’t lying so much as throwing out buzz-words. Apparently Marc saw that infomercial for The Gazelle that promised a high-caliber work out and had another booze-soaked revelation, so we can understand him including it in his sales pitch. Sometimes we even use it when ordering a meal (would you rather dine with someone eating a side salad or a high-caliber side salad?) So really, it can’t be held it against him that he’s trying to spice up his pitch. Then we noticed on the Bulletball FAQ that Marc compares 15 minutes of Bulletball to a full week’s workout. Now we are calling Marc Griffin a terrible liar. 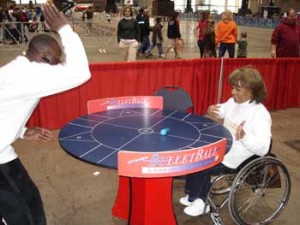 Admittedly, this part is actually pretty hard to watch. Marc just told us how he sold everything he owned for his wacky dream. It should go without saying he doesn’t have much: he doesn’t have a home, he doesn’t have a job and he certainly doesn’t have his wife- what did you think his response would be, “A pocket full of miracles?” Asking a man who’s sacrificed everything what he has left is just as sad as telling a clown he has three weeks to live. At this point you can only hope that Marc will honk his nose, tie a balloon into an overly phallic poodle and ride away on a unicycle. Instead he says that he has Bulletball, a game he’s been unable to successfully market for some twenty or so years. And that is what it’s like… when doves cry.

At this point the same judge asks what happens if they pass on Bulletball (and presumably Bulletball EXTREME) and you can just watch Marc’s face melt once he realizes that things may not be going according to plan. All at once he goes from “lovable problem drinker” to “emotional train-wreck of a human being.” Inevitably all the judges say no and Marc makes the long walk of shame. Despite being told that he’s wasted his life by four complete strangers, Marc maintains a happy, if not creepy attitude, saying that someday he’ll look down from Heaven, notice that Bulletball has become hot shit, and smile knowing he was right all along. Then he’ll high five God before descending to Earth to play skee ball on a New Jersey boardwalk.

Since his humiliation on national television Marc has been the butt of many of the internet’s jokes. Opinion is generally divided between “this guy is foolish” to “this guy is a depressing fool.” But you know what, internet? He’s a hero. Sure, Marc ultimately failed in his quest but he never quit, even after he spent 25 years living and breathing his creation. He’s a lot like Sammy Hagar; where would we be now if he had learned to drive 55? Would we have as many reckless drivers, auto accidents and kick-ass police chases had he not penned that ode to questionable behavior? No ma’am. In that same sense Marc is an inspiration to us all, reminding us that no idea is so terrible that you can’t dedicate half of your life to thrusting it upon an unenthusiastic audience.

And that, dear reader, is the American Dream.