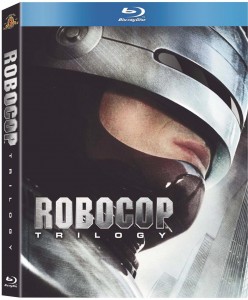 On October 5th, you will be able to own the RoboCop Trilogy on Blu-ray for the first time. The trilogy is classic action-packed guy films that is a must-have for your movie collection. I’ll always remember how the films correctly predicted the future of today’s infomercials with the classic lines like, “I’ll buy that for a dollar!” I also love how RoboCop’s gun came out of his leg as if it was a futuristic holster for the sci-fi cowboy.

These films will make you remember the rock’ em sock’ em action of the half man/half robot cop that “serves and protects” the people of Detroit. Peter Weller of course stars in perhaps his most famous role as RoboCop. Paul Verhoeven from Total Recall and Basic Instinct directed the first RoboCop film, Irvin Kershner directed the second installment, and Fred Dekker directed the third film.

RoboCop came to theaters in 1987 and tells the story of a terminally wounded cop named Alex Murphy in a city overrun by crime. With the latest technology, scientists are able to give Alex a second chance by transforming him into a super cyborg cop. Even with great power our hero struggles with his memories as well as taking down the evil guys of Detroit. Flash forward three years and you have RoboCop 2, where a corrupt businesswoman is looking to unlock the secrets of RoboCop and take him down while creating her own cyborg. In 1993, RoboCop 3 hit theaters with RoboCop coming to the aid of people being forced to move from their homes by malicious land developers.

The RoboCop Trilogy collector’s edition is available for $36.49 at Amazon.com. So pick up the Blu-ray and enjoy a blast from the past that is set in the future! In addition, you can win a copy of the RoboCop Trilogy by following Gunaxin on Twitter.

Plus, thinking about RoboCop, I was wondering about who would win in a fight — RoboCop or the Terminator. Let me get your thoughts in the comment section. I think RoboCop would win since he has attributes of both a robot and a man! Now, check out the trailer for the original RoboCop.