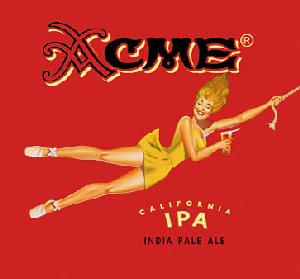 Information: (Site) “Acme IPA is profoundly hoppy, finished with over a pound of fresh, whole hops per barrel. The result of this generous hopping is a beer that is deliciously dry, and eminently drinkable in spite of its apparent strength.“

As I meander through the remnants of my World Market ‘Winter’ brew collection, I stumble across a beer even I’m surprised I haven’t tried yet. I see several styles of the Acme brew all over the place, and I have yet to partake, so this is quite nice that this particular choice is one of this great variety box.

The pour is a whisper shy of looking like a Pilsner in its pale yellowest form, but the unmistakable aroma of a heavily hopped IPA wafts out like a warm hand shake. The smell, after a closer inspection, is at once fruity and peppery at the same time with that telltale nose of hefty and dry Pale Ale body. The head, like the standard of its namesake, vanishes to a slight foamy halo.

And the tongue knows what it knows when an IPA is in town. It is rather bitter, but not so much so that you wince at it’s overt strength. However, unlike so many in the Pale Ale family, there is a distinct undertone of ripe grapefruit notes. It has a snappy bite to it just like digging into the citrus halves at a breakfast table, and is followed instantly by a spicy, peppery nip the matches the rind perfectly. This is such a nice representative of my rapidly-favored IPA style, and at the same time just that much different, as well. It’s a bit tougher to match bitter beers with food, but since going with something sweet is a safe bet, I’d say a honey-glazed ham would work out quite well.

Rating: * * * *
An IPA with a little something extra that sets it apart from the pack.