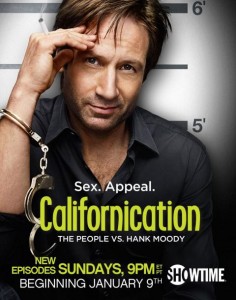 Hank Moody (David Duchovny) in a promo poster for season 5.

Californication is a gem of a show, one of the best programs on television, and the lead character, Hank Moody (brilliantly portrayed by David Duchovny), is largely responsible for that.

David Duchovny is incredible in his portrayal of Hank, a one-hit-wonder of a writer, too lazy and uninspired to create after his long-gone success. Duchovny perfectly captures the self-destructive idiosyncrasies of a writer. Hank drinks too much, smokes too much, and talks too much. He is certainly talented and can write, but these days he would much rather concern himself with womanizing all of Los Angeles. When we first meet him in season one, his writing days seem long behind him.

While Hank appears to be lonely throughout most of the series, he is frequently accompanied by Charlie Runkle, his best friend and struggling agent. The two form an interesting bond, engaging in everything from brainstorming sessions to threesomes. Karen, Hank’s longtime girlfriend, is also an important fixture is his life, as he considers her to be his “soul mate,” yet fate seems to always interfere with their relationship, keeping them separated for much of the series. 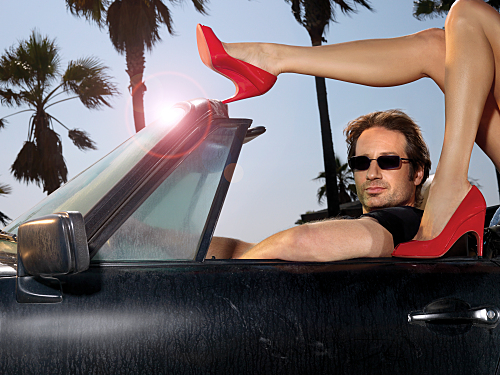 Women are irresistible to Hank and vice-versa. But in fact, they seem to be the cause of most of his problems. The writers of Californication are ingenious in the way they fling Hank into a myriad of ludicrous situations involving women, then drag him out relatively unscathed. He is often branded as having the attitude of an “asshole” by the many women he encounters, but half of them wouldn’t sleep with him had he not exhibited such an attitude. He simply does not give a shit.

If you are easily offended and dislike politically incorrect humor, stay far from this show. Its humor and political incorrectness are what makes it unique. The show has stirred controversy by using words that some people consider offensive or obtuse, but most of these accusations are unwarranted. Hank Moody’s treatment of women has come under question by some groups and viewers, but he only acts as any man should: with supreme confidence.

Any man would like this show, regardless of race, class, or sexual orientation. It taps into something inside all of us, something we all feel. What separates Hank from most of us his ability to unleash the true essence of man through his actions. This is what attracts people to him, men and women. The magical thing about the show is that it reveals to you not only things about what a man can be and what a man can do to attract women, but it reveals to you things about yourself.

I encourage all men to watch (Sundays at 9pm) Showtime’s comedy-drama Californication, a show that is, more than anything, a dynamic journey through the life of the everyman.