Sports > Football > Can Plaxico Burress Return to the NFL?

Can Plaxico Burress Return to the NFL? 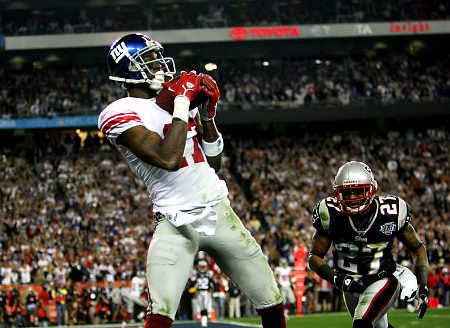 A few short years ago, NFL wide receiver Plaxico Burress was catching the game- winning touchdown in Super Bowl XLII as a New York Giant. Now, Plaxico is getting out of jail for weapons charges after accidentally shooting himself in a New York nightclub.

Burress was first greeted by his agent, Drew Rosenhaus, who leapt into his arms like a little kid in a candy store hugging his mom. Burress is one of the highly touted free agents if the 2011 NFL season gets off the ground and from the national media machine, he appears to have many suitors in line.

The real question seems to be is can an NFL player who has been in jail for the past couple years actually have an impact on an NFL team? Burress at the time of his release is 33 years old and is still the physical anomaly in the NFL being a 6’5 wide receiver.

We already had an NFL player succeed in recent memory after being in prison, Eagles quarterback Michael Vick, and he only needed a year to get up to speed and back to his old playing ways. It’s perceived by many of us that the quarterback position is more demanding than the wide receiver position and if Michael Vick can do it, why can’t Plax?

The major issue that I see going forward for Plaxico is that thirty-three year old wide receivers don’t get any younger. He has the physical tools to do his job but can he still burn a 22-year old rookie off the line of scrimmage? Can he run the correct routes if he’s a step slower? The NFL is not the NBA or NHL that you can pick up where you left off or being retired for an extended period of time.

However at this point, Plaxico is probably more focused on other things that go way beyond the world of football since there are more important things to consider before your line of work. However, the NFL is one fickle mistress and the phone lines are always open.

Hopefully for Plaxico’s sake, he can bounce back and earn some of that money he lost after making a dumb decision two years ago and maybe he’ll be back to catching touchdowns sooner rather than later.