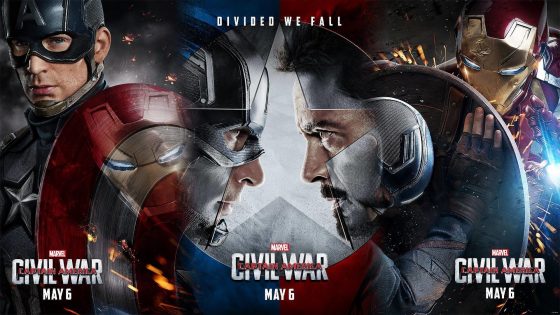 These words are finally given true meaning in the latest offering from the Marvel juggernaut, Captain America: Civil War. In the Marvel Cinematic Universe’s 8-year, 12-film existence, we’ve seen countless buildings exploding, damage in the estimated billions of dollars, and countless lives ruined and lost. And what have our heroes, The Avengers, been seen doing at the end of it all? They’re safe in their compounds, removed from the society they’ve sworn to protect. Or they’re eating shawarma as the restaurant workers clean up around them, as seen after the closing credits of Marvel’s The Avengers, the first film to bring a large quantity of the cinematic Marvel superheroes together. 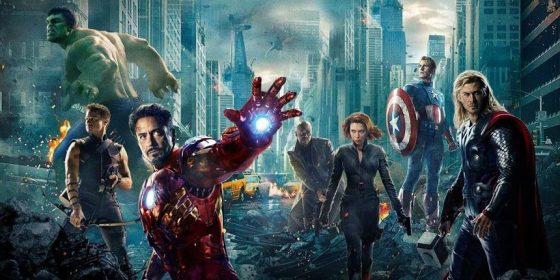 As much of a goof as that film’s writer and director Joss Whedon may have wanted this end credits stinger to be, it was an oddly precise metaphor for what these films became – destruction-fests with none of the cleanup or responsibility. However, in Anthony and Joe Russo’s Captain America: Civil War (the 13th installment in the MCU), we start off immediately in the middle of an Avengers mission in Lagos which ends in a severe loss of civilian life, all to retrieve one vial of a stolen bioweapon. The bioweapon has no bearing on the rest of the film, but it’s the fallout from the mission that inexorably leads into the film’s crux: How far is too far, and is it better to stay above the law than beneath it?

The Marvel films have always been black-and-white, with clear heroes and clear villains. Where Captain America: Civil War succeeds on such a great level is it lives in that hazy, ill-defined gray area where politics and action collide. The aftermath of the aforementioned mission has the Avengers targeted for governmental oversight by the United Nations, led by Wakandan president T’Chaka (John Kani), with over 100 countries around the world coming together to back his proposal. The Sokovia Accords, so named after the harrowing final events seen in Avengers: Age of Ultron, would make superheroes part of a worldwide military force with the appropriate supervision. No longer willing to be called a vigilante and faced with the facts that his and the Avengers’ heroic actions killed innocents, Tony Stark (Robert Downey, Jr.) calls the Avengers together to sign the proposal and bring them into line. 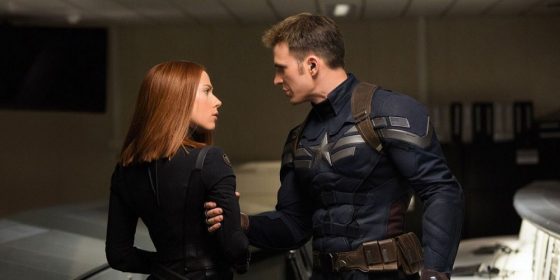 On the other hand, you’ve got Steve Rogers/Captain America (played once again with amiable stalwartness by Chris Evans in his fifth outing in the star-spangled suit) firmly standing with the conviction that the Avengers need to stay above the law in order to protect society. Unwilling to cut through red tape and bureaucracy to get the job done, he refuses to sign the Accords and sways a few superheroes – among others, Sam Wilson/Falcon (Anthony Mackie) and Wanda Maximoff/Scarlet Witch (Elizabeth Olsen) – to join his side. Rogers’ stubbornness in not adhering to the Sokovia Accords, believing that government oversight will only slow them down and make them ineffective, is almost antithetical to his character, and his bullheadedness and disrespect seem a little out of place. Screenwriters Christopher Markus and Stephen McFeely have painted him as the dark side of the character we saw in the first two Captain America films with how he blindly advocates for unlimited action with no consequences. 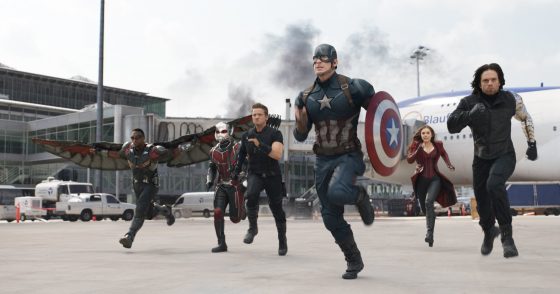 All of this gets thrown into sharp relief when The Winter Soldier, a.k.a. Bucky Barnes (Sebastian Stan) is suspected of bombing the massive Sokovia Accords signing ceremony. Rogers breaks the Accords to get to his onetime World War II compatriot before the Strategic Homeland Intervention, Enforcement, and Logistics Division (S.H.I.E.L.D.) and the Avengers on the other side get to him. Branded as criminals and sent into hiding, Rogers, Wilson, and Barnes try to get to the bottom of who tried to pin Barnes as the fall guy for the bombing. Of course, a lot of this could probably have been solved much quicker and easier if someone piped up at the appropriate moment and said, “Bucky didn’t do it!”, but since when has Marvel ever taken the easy route?

Captain America: Civil War runs the gamut from dark to light, making obvious choices for comic relief, but never shying away from the more horrific side of this looming battle between the ragtag family so carefully and lovingly assembled over these last 12 movies. The fights you’ve all seen hinted at in the trailers and the TV spots with Scarlet Witch, Falcon, Clint Barton/Hawkeye (Jeremy Renner), The Winter Soldier, and Scott Lang/Ant-Man (Paul Rudd) on one side and Iron Man, War Machine (Don Cheadle), Natasha Romanoff/Black Widow (Scarlett Johansson), T’Challa/Black Panther (Chadwick Boseman), Vision (Paul Bettany), and an out-of-nowhere Peter Parker/Spider-Man (Tom Holland) is just for show and fun. It’s what the audience wants to see. What the audience doesn’t want to see is one of the ugliest battles in Marvel Cinematic history between Captain America, Iron Man, and The Winter Solder. 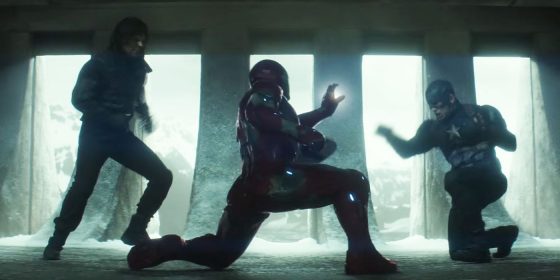 These two fights define the themes of Captain America: Civil War, and they also define its greatness. The first is the one that everyone wants – the mano a mano of unstoppable forces meeting immovable objects. Wit, sass, and humor abound in this battle royale, and it’s everything you’ve waited for since Marvel announced this movie. It’s exactly the kind of fight that fits so well in the Marvel pantheon and it’s definitely one for the ages. The editing and cinematography of these fights are a little choppy, shaky, and in-your-face, but what would you expect from a film aiming for a PG-13 rating without actually showing you blood or extremely violent material? 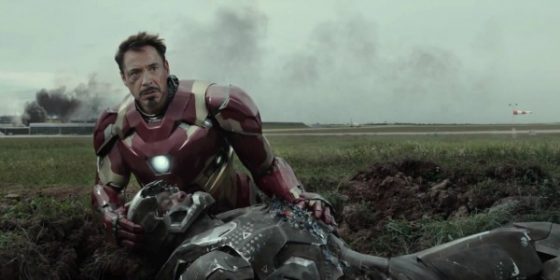 The second fight is the nasty underbelly with the consequences and weight that no one expected or wanted. Brutal and vicious, no punches are pulled and nothing is held back as three near-indestructible powerhouses slug it out. Well, “slug it out” may be too light a term for what transpires here; the title of the movie may be Civil War, but we’re seeing a horrible war between the three behemoths and none of it could possibly qualify “civil.” 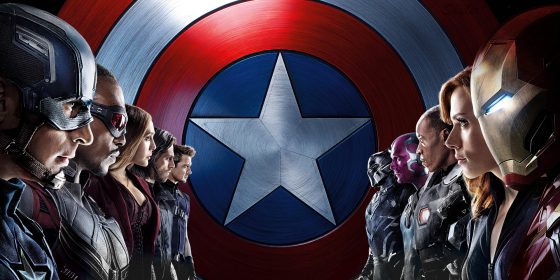 Captain America: Civil War is based on the seven-installment Marvel Comics series “Civil War,” which pitted entire legions of Avengers and other enhanced humans against each other. A veritable cast of hundreds has been graciously dialed back to a mere handful for the film, thankfully; even though Captain America’s name is on the title, we’re still left with a movie that feels a little like it should have been called The Avengers Part 3. The Russo Brothers have a lot to juggle here – keeping Rogers’ narrative moving forward while showing what the other side’s doing to counteract – and they pull it off beautifully. They also don’t merely cross the line between heroes and villains, but they almost erase it completely, making everyone a little bit of both at times, and it’s certainly a hard task to do without alienating fans on either side. It dares to be great and succeeds in fine style, with surprising depth and emotional weight that so evaded the earlier 12 films. Combined with its trademark action and humor, Captain America: Civil War may very well be the best Marvel film yet.

It dares to be great and succeeds in fine style, with surprising depth and emotional weight that so evaded the earlier 12 films. Combined with its trademark action and humor, Captain America: Civil War may very well be the best Marvel film yet.