Sega and Marvel have brought Captain America to the PS3, XBOX 360, Wii and Nintendo DS. The game Captain America: Super Soldier is being released today in conjunction with the film that will hit theaters on July 22nd. I was able to test out the game for both the 360 and Wii. One of the knocks against video games based on movies is that they don’t live up to the hype. That might be true in some cases, but for Cap it is NOT! This game kicks as much butt as Cap does in the movie. One of the biggest weapons, if not the biggest weapon for Captain America is his iconic shield. Sega has done a “Marvel”ous job with integrating the shield in the game. Along the way you gain upgrades for Cap for his shield, fighting skills, and combos. 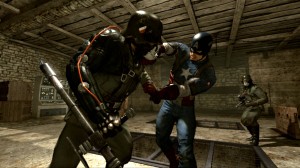 The game starts off where Cap helps out the US Soldiers in Germany. Right out of the gate the game helps you in the trenches to learn Cap’s moves in an educational, but fun way so you don’t feel like it is a regular tutorial. You can read the manual for the game, but come on now, who actually does that?

The game is set in the darkest days of World War II as you face the Red Skull and his army.  As Captain America’ you can use his shield to take out multiple enemies at once, deflect incoming fire back at your enemies, solve puzzles, and scale walls.

You play the game in the third person view. You engage in free-flowing combat and acrobatic platforming to infiltrate Hydra’s castle and battle the infamous Iron Cross, the forces of Hydra, and a host of nefarious enemies serving the Red Skull.  For all you fanboys and fangirls like me you will love the fact that you can gain access to multiple Cap uniforms and check out videos, concept art, and read Baron Zemo’s diary to learn more about Cap’s arch nemesis.

The gameplay is very similar to that of Arkham Asylum (which for all you gamers, you know how great this game will be for you to play.)  The game lets Cap use his extensive acrobatic abilities so you can scale walls, climb ledges, and vault from poles to overcome environmental challenges. If you time the jumps you can discover multiple paths through missions. The “Free-Flowing Combat” allows you to move freely through the castle battlefield with acrobatic precision as you take down multiple enemies with devastating combos. Take control of a turret or grab a soldier from behind and use his weapons against him. What is a Superhero without his enemies? He faces the Red Skull, Arnim Zola, Baron Strucker, Madame Hydra, Iron Cross, and more.

For more info on this great game check out the Captain America video game site here, and to purchase the game click here! To get you ready to take on the Red Skull and help out America watch the trailer below!