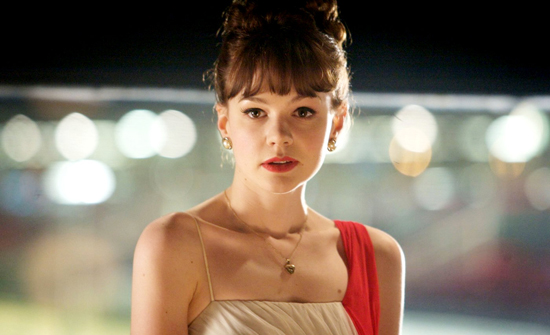 Most celebrity interviews about upcoming movies are superfluous nonsense chock-full of well-intentioned, but ultimately worthless, platitudes. Reading the back of a Cap’n Crunch box is more exciting. However, on occasion and actor or actress will let their guard down and offer a glimpse into their true personality rather than regurgitate stock answers provided by the publicist. The always engaging Carey Mulligan did that very thing while chatting with Vulture about her part in the movie Shame.

On her opening nude scene:

Now, this could easily be false humility, but I’m calling it honesty.

On whether or not her character Nina is similar to himself:

I have done a few of the things she’s done. I have got horribly drunk before. I have cried on the phone to a boyfriend before. And [my friend] has seen all those things. So it was awesomely freeing to be able to do that character. I’ve had those moments before where I just get lost in a mess, where I’m just a complete mess.

A drunk, weepy mess? I think I’m in love.

On growing up with her brother:

It’s fun to have a big fight. I have an older brother, and we used to beat the shit out of each other when we were kids. Like, we used to damage each other.

A drunk, weepy mess who beat the shit out of her brother? I know I’m in love.

On her role in the film Drive:

I didn’t work very much on Drive, I just came into work and stared at Ryan Gosling occasionally.

Best. Quote. Ever. If you’ve seen Drive, then you know she’s not lying. I dug the flick, but her performance was limited to ogling and heavy breathing.

On getting pulled over with Drive director Nicolas Winding Refn:

The policeman comes round and I roll down the window and he tells me that I was weaving — which I was, since I was trying to figure out my nav guide — and I’m sitting there in my pink fluffy slippers, Nic’s sitting there in his Puma tracksuit looking like a drug addict, and the policeman’s like, ‘What are you doing?’ And I say, ‘I’m not drunk I just had seventeen Red Bulls!!!’

Be still my heart. Carey Mulligan sounds like the chillest chick in all the universe. This almost makes up for her dating Shia LaBeouf. Almost, but not quite.

Here’s the trailer for Shame with Mulligan showing off her singing voice. Wait, she sings too? I’m at a loss…