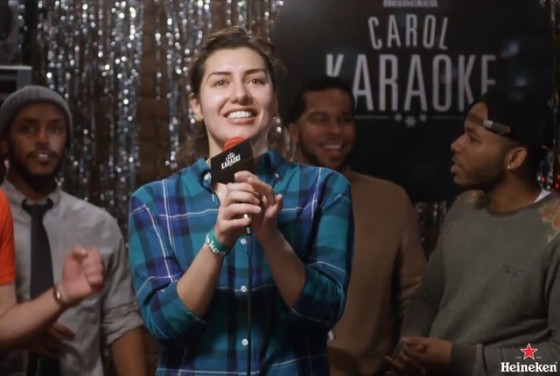 What if you were singing holiday carols to a few friends at a karaoke bar, when suddenly your performance became a concert broadcast before thousands on the Jumbotron at a professional basketball game, in Times Square and on the screens of nearly every New York City taxicab?

Yeah, the folks at Heineken did just that to some unsuspecting victims, and the results are pretty hilarious. Heineken gave a few lucky strangers the chance to brave the crowd and belt their favorite holiday carol in front of thousands of strangers. Check it out:

Well, after watching these guys belt out the carols to thousands, what say you? Would you or wouldn’t you jingle bell rock for a crowd of thousands? Share your thoughts with #CarolKaraoke.

A recent survey for Heineken revealed which songs Americans love to sing and which audience causes the greatest anxiety.