Carrie Milbank was on hand to interview NHL Players recently in New York, and being the stalker that I am, I’ve found the photos. Yeah, I didn’t have to look too hard, she posted them on her Facebook page. So here is Carrie with some of the NHL’s biggest stars. The Tim Thomas photo is cropped because he was wearing a “secret” jersey, and yes Zdeno Chara is trying to hypnotize you. 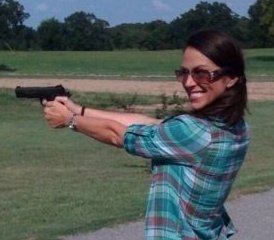 As long as we are looking at photos of Carrie, I figured I’d share these other recent images, including this gem of Carrie packing some heat. The mini-gallery also includes many of her with a new squeeze (who does seem to like squeezing her). Apparently Carrie has recently gone through a divorce (from the guy who was called the “Fat Rich Guy” by one of our commenters) and sadly is already off the market again. There is also a nice photo from an Anna Kournikova interview in the mix.