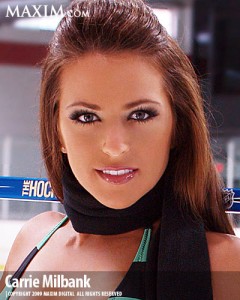 Carrie Milbank is the host of The Hockey Show on the NHL network, and a former Houston Texans Cheerleader. She also hosts Tennis Week, and People.com’s Who Looked Hot. It is no secret that I am fond of Miss Milbank, and I previously featured her with the best gallery of Carrie Milbank photos on the net. Well apparently Maxim has noticed her now too, as she was recently highlighted in their “Today’s Girl” feature on the website. The subtitle, “Poke checking never sounded sexier” was particularly witty. As part of that piece, they interviewed Milbank, and lucky for us, there is video below. So yeah, I guess you can say I am a little jealous. I too have recently interviewed Carrie, but through e-mail. She was kind enough to answer Gunaxin’s Six Questions, and I thank her for providing some saucy answers. Also, to add to that previous epic gallery, we have some new photos of the Ice Princess.

Several of the photos in this gallery (including what was on Maxim) and in our other gallery were taken by her friend and photographer Katie Ambrose. Check out her site, and her blog for more great photos.