Back in 1974, horror comedy was a relatively new thing and many movie makers were experimenting with the idea of mixing comedy with horrific on-screen scenery. Some of those people were Hal and Jim McElroy and director Peter Weir. Weir had never directed a feature film at that time, but had convinced the McElroy brothers that his story was a good one. 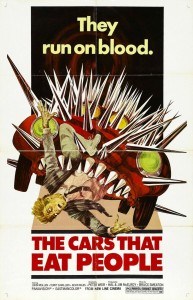 The film was set and shot in New South Wales, Australia in the fictional town of Paris.

For American audiences, the film had little pull, and was given the ridiculous title of The Cars That Eat People. Ridiculous being subjective, of course, as the original title was obviously meant to be more cosmopolitan than its actual setting.

The film itself is a sort of combination of crash up derby, horrific (mostly implied) human injury, medical malpractice at its finest, and bad acting. Basically it’s the perfect B-budget comedy horror film requiring only a couple of friends, some brews, and a willingness to ignore (or laugh at) the unintended laugh points the movie creates for itself.

The basic plot is pretty simple and builds the framework on which The Cars That Ate Paris thrives. A couple driving through the town while on vacation (er.. holiday) are involved in a fatal accident. It’s then that the nature of the rural town of Paris, Australia becomes clear. Townspeople, who arranged the accident, quickly descend on the car and begin looting its contents. Eventually we learn that the cars themselves are then used by townsfolk as weird restomods for derby-like accident creation. 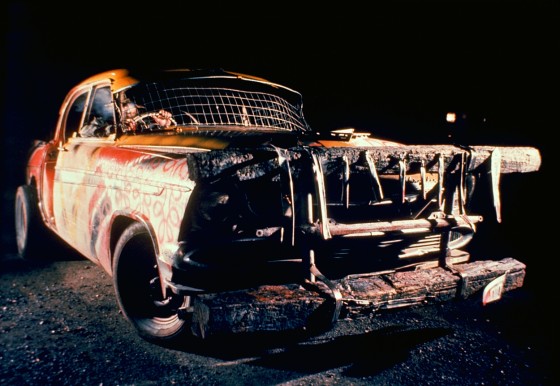 Things get really horrific when we begin to learn what happens to the survivors of the accidents. Hint: it involves a deranged surgeon, power tools, lobotomies, and a town mayor who has adopted the children of accident victims. The hero of the story is one such accident survivor who is spared the surgeon’s lobotomy drill.

This is a great film made purely for fun whose top claim to fame is its success at the Cannes Film Festival where it debuted. If you’re a fan of Mad Max: Fury Road, released this year, you might recognize the porcupine Volkswagen Beetle from this film which made a cameo in one scene.