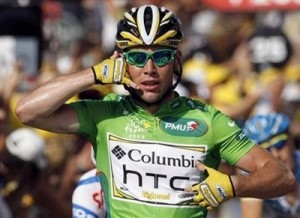 Mark Cavendish, from the Isle of Man, was easily the sensation of the 2009 Tour de France, winning six stages. If you have witnessed this man on a bike, then you know that he simply cannot be caught in a sprint. In his victory on Sunday’s concluding stage, Cavendish, and his lead out man Mark Renshaw, blew past the field to an easy one, two finish. However what you may not know is that Cavendish took those stage victories on a WWII Fighter Plane.
VeloNews has the story: 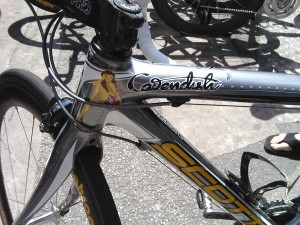 According to Scott marketing coordinator Lionel Girardin, Cav’s Addict is called the “Sprint Air Force.” It wears paint and decals in a World War II fighter airplane theme. The top tube sports wing decals, each pair signifying a shoot-down in the style of the World War II dogfighting days. “Just as fighter pilots mark their planes with each successive kill,” said Girardin.

The bike sports a custom silver-painted finish with faux rivets. Decals of a pinup girl holding a British flag, Cavendish’s name in script, and the lettering “Sprint Air Force” accent the fighter airplane theme. He’s also got a green SRM power meter head unit and green Oakley Jawbone glasses to go with the green sprinter’s jersey he wore early on in the race.

Yup, the dude has a pin-up girl painted on his bike, complete with a Union Jack flag. Awesome! I’m not sure if it would be possible for Cavendish to be any cooler, or for us to have a bigger man crush. Check out the gallery below for more images of his sweet ride.

Need more proof of how badass Cavendish is? How about some interview quotes from Maxim :

He was accused by Italian Filippo Pozzato of holding on to the back of a car when his climbing skills improved. “They can’t understand I’ve gone home and worked hard,” he says. “It’s frustrating but, you know, he’s a dickhead. I don’t give a shit, really.”

Accusation of doping in cycling really pisses him off. “Everyone thinks cycling is a big doping sport,” he claims. “But Wimbledon is on at the minute. You can’t tell me they’re not dickheads doing drugs in that sport.”

… and how about this, in relation to Cavendish being racist, from Bicycle.net:

Speaking to L’Equipe under anonymity for fear of tactical reprisals by Cavendish and his Columbia team during the July 4-26 race, the riders said they have just about had enough. “Cavendish is racist, he’s anti-French,” said one rider. “He should be careful. We’re not going to put up with his attitude much longer.”

“Someone showed me the article this morning and I had to laugh,” Cavendish said. “It’s a small article by an anonymous writer and with comments from an anonymous rider. I’ve got to take it as a compliment if they’ve got nothing else to write about. They can’t criticize my cycling, so they start this shit. For sure, I’m going to upset some people because I’m an arsehole, but it isn’t relevant what nationality they are or where they come from. But I didn’t say it and I hope the person who wrote it and said it feels guilty. I’m just going to brush it off.”

Even if Cavendish said, “Move out of the way Frenchie, I have a race to win!” as he was streaking to the front of the Peloton, I fail to see how that makes him racist. France is a country, not a race. Since when has it been taboo to hate a country, especially the French?