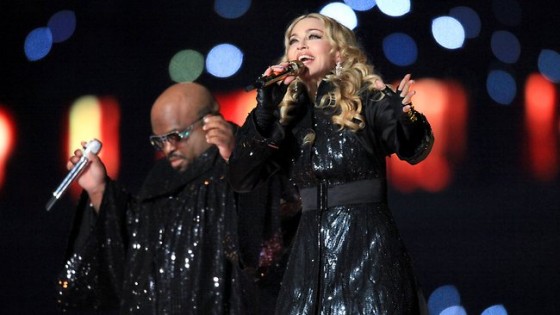 We weren’t exactly excited about seeing Madonna in the 2012 Super Bowl halftime show. The prospect of being subjected to pop music for the second year in a row, after the Black Eyed Peas train wreck last year, made a long trip to the fridge for several handfuls of beer sound like a great idea. 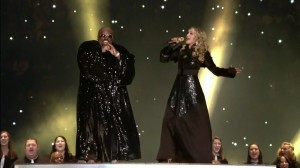 What happened to rock music? Aren’t there any bands, like aging rock stars The Who or Tom Petty, eager to give real entertainment to the football fan masses during the halftime show?

It started off predictably enough. Madonna came out on a giant chariot, second in size only to her ego. She doesn’t look a day over 30, at least from a distance and after who knows how many plastic surgeries.

Listening to “Vogue,” it felt like the mid-eighties again, like being stuck listening to your girlfriend’s new record rather than watching a halftime show.

Some more club music throwaways joined Madonna for her big medley. One of them ripped off her golden skirt in a response to the last year a washed-up pop diva played the Super Bowl: Janet Jackson with her wardrobe malfunction in 2004, the only interesting part of that show. 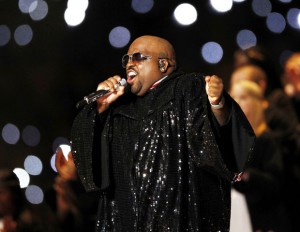 However, the show was salvaged at the end by the appearance of Cee Lo Green dressed as a preacher during “Like a Prayer.” Cee Lo is a legend in soul and hip-hop music, starting out in the Goodie Mob, collaborating with Outkast, gaining massive success as the singing half of Gnarls Barkley, and putting out great solo releases like 2010’s “Fuck You.”

His voice is clearly better and more powerful than Madonna’s. She should have given him a whole verse!

What’s more, it has been reported that early Thursday morning Cee Lo rolled into Indianapolis with the reformed Goodie Mob and spent $10,000 at a strip club! Now that’s a man who deserves a Super Bowl halftime show all to himself.