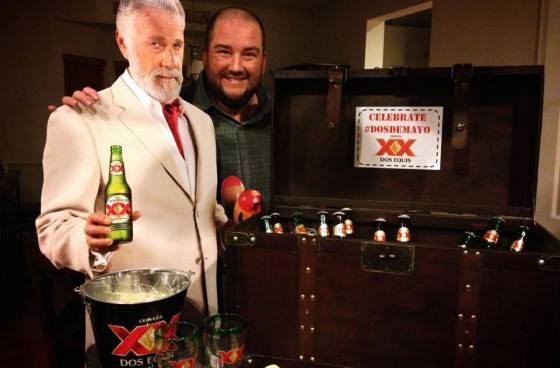 You’d have a goofy smile too, if they sent you free beer.

This week we received an urgent package from The Most Interesting Man in the World. Apparently he’s concerned that Cinco de Mayo falls on a Sunday this year, and “while you may brunch hard, Cinco deserves more than just an afternoon of your time.” So he has proposed instead that we kick-off the celebration on Thursday. It just so happens that Thursday is Dos de Mayo, which goes perfectly with his favorite beer, Dos Equis. We’ll just ignore that Spanish uprising from 1808 and instead focus on getting drunk in the name of celebrating Mexico!

Fans 21 and over looking to celebrate Dos de Mayo can check out DosdeMayo.com for the Dos Equis Bar Locator tool, which will help connect like-minded party-seekers with local bars and restaurants that serve Dos Equis.

Mobilize everyone – your friends, co-workers, mistresses, neighbors – and join the movement. Stay thirsty my friends.

Follow #DosdeMayo to connect with people celebrating nationwide, and make sure to post your own photos and updates using the hashtag #DosdeMayo on Facebook, Twitter and Instagram. For the most up to date information on Dos de Mayo or Dos Equis overall, visit DosdeMayo.com or Facebook.com/DosEquis.