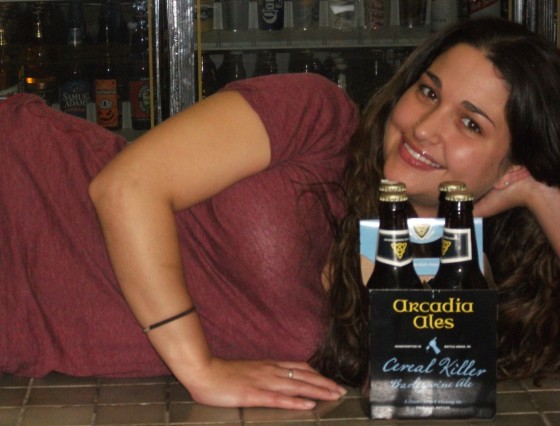 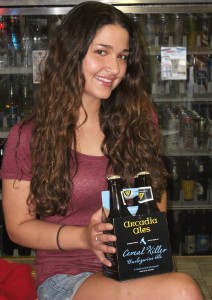 Information: From the Site – “Brewed in the traditional English style of Barleywines, Cereal Killer is an explosion of full-bodied, malty goodness. Huge syrupy flavors flow over caramel, toffee, molasses and toasty notes. All these rich malt flavors are balanced out nicely by just the right amount of citrus-like hoppy bitterness. A high alcohol content makes this a beer for the cellar. As this brew ages, it will continue to develop more sherry-like flavors and aromas similar to a cask-aged port. This is a BIG beer. True to our original vision, we have taken a traditional style and tweaked it a bit. Delicious on its own, Cereal Killer is also brilliant with many foods, or as a digestif.“

Before I really get into the review this week, I’d love it if you all said a hearty ‘Hello’ to Ms. Mistie Glidewell! She is the comely lass who very graciously allowed me to take a few pics of her with the very beer I intend to review! You see, she and I work at the Portage City Wine Cellar (big ups!) and after a lengthy diatribe on what it is that I do outside of said store, her interest was piqued and who am I to deny a pretty lady the opportunity to model a few bottles of brew? So here she is, folks, in all her sweet glory. Comments are appreciated.

So, here’s the skinny on one of the most unusual beer experiences I have ever had. Now, I have had some harsh IPA’s with enough mouth-puckering bitterness to make the lay-person cringe in agony; I have had dark Imperial and chocolate Stouts with cloying and syrupy sweetness to make one wonder if it was actually beer at all and not Yoo Hoo; and I have had Bourbon-Cask-aged brews powerful enough to warrant periods of drinking time akin to miniature life times, but I have yet to taste a beer (more over, a Barleywine) that even came close to the olfactory and taste assault I was inundated with after trying Cereal Killer. 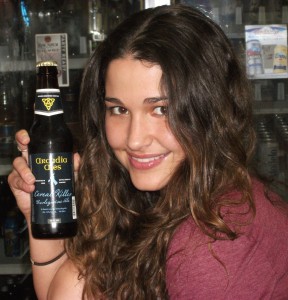 And that isn’t to say that it was bad, just incredibly different. Even the word ‘Cereal’ in the title isn’t at all as deceiving as one might expect. It honestly tasted like different variations of actual Cereals. No, I’m not making that up. Now I don’t mean sickeningly sweet crap like Lucky Charms or Cap’n Crunch, but there were definite notes of things like Cheeri-O’s, flavors reminiscent of Bran, and even wheat-like undertones that could have come from any number of boxed breakfast fare. It is such a barrage of different flavors and notes with ever swallow that it’s almost a disservice to describe this beer as any one style. It is best pronounced just as it is in the opening paragraph: malty, toasty, slightly citrusy, and full-bodied unlike any other. This is certainly one for the slow, languid drinkers who prefer an amalgam of substances with their brews. This is a beer for seasoned beer drinkers.

Rating: * * * * 1/2
Try this beer only when you’re prepared for something very unlike anything else.