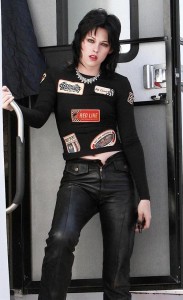 News broke in late 2008 that Twilight star and Gunaxin’s own Top Up and Coming Actress Kristen Stewart was to take on the role of Joan Jett in “The Runaways,” a rock ‘n’ roll biopic of the 1970s all-girl band. She was later joined by Dakota Fanning as band-mate Cherie Curr, and now Micheal Shannon is in talks to join the cast of the rock biopic.

Filming has already began, and the movie is being directed by video director Floria Sigismondi (who also wrote the screenplay). And if that weren’t enough, Joan Jett will act as an executive producer. Pictures are starting to leak on the biopic, such as the nice one to the right of Stewart as Jett. She has the look down pretty well. As for the move, early word makes it seem like it’ll be an interesting one. If anything, a movie about an all-girl band can’t be all bad with nice eye candy. 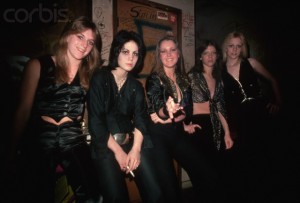