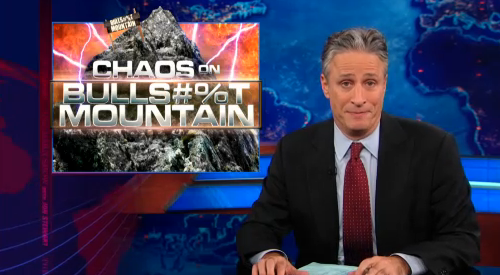 Jon Stewart needs a longer show, because the half hour allotted to The Daily Show just isn’t enough for him to keep up with all of the bullshit. In order to properly call out the hypocrisy in politics and the media, he could easily fill programming on a 24-hour network. In last night’s episode, Jon took on the latest bullshit from Fox News, specifically in regards to the secret Mitt Romney tape. A night after tackling the 47 percent, tonight he turned his attention to the ever-present hypocrisy amongst the “fair and balanced.”

BTW, as an Independent, I certainly concede that MSNBC is pretty close to the level of bullshit piled up by Fox News – and this nation would be better off if more people avoided both networks.