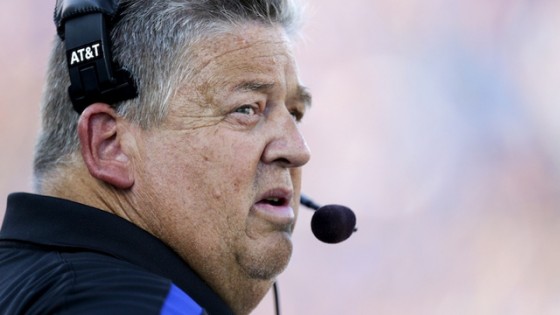 It’s easy to be discouraged as a Kansas Football fan. The Jayhawks play second fiddle on their own campus to the basketball team, are overshadowed by in-state rival Kansas State and have won two conference games in the last four years. That was supposed to change this year, as Kansas brought in former Notre Dame head coach and NFL coordinator Charlie Weis as their head coach. Things haven’t gone as planned however, as Kansas has gone winless since a season opening victory over FCS South Dakota State.

This has led to Weis becoming increasingly desperate for fan support in the run up to the season’s final home game, this weekend against Iowa State. Weis has taken to Twitter, for requesting, then begging, for fans to show up, even going so far as to offer to purchase tickets for students.

All KU students. Not going to the game because you don't have a ticket? No problem, I'm buying! Send our seniors off the right way!

We applaud Weis for the effort to fill the stadium, though we have one piece of advice. If you really want fans to show up at a Kansas Football game, show the basketball team on the big screen.