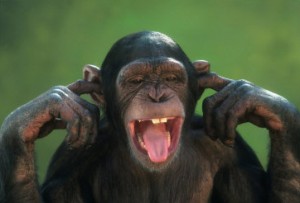 A very unfortunate event happened Monday as Travis the chimp attacked a friend of his owner. From Fox News:

Police shot and killed a 200-pound chimpanzee in Connecticut Monday after it attacked a 55-year-old woman, leaving her in critical condition with major, “life-altering” injuries to her face and hands.

Police say Charla Nash was visiting the home of the primate’s owner, 70-year-old Sandra Herold, when the chimp attacked. Herold saved her friend’s life by stabbing the 14-year-old chimpanzee with a knife and bludgeoning him with a shovel. The chimp was eventually killed by a police officer who responded to a 911 call and shot the animal as it opened the door and entered his patrol car.

So of course this story begs the question, why does a 70 year-old woman have a chimpanzee as a pet? And then there is this story… from the N.Y. Daily News…

The Rev. Al Sharpton called Thursday for a citywide boycott of the New York Post over an offensive cartoon that critics believe compared President Obama to a bullet-riddled chimpanzee.

We here at Gunaxin refuse to let the actions of one chimp spoil the whole lot of them (just like we don’t hear Al Sharpton as the voice of all African-Americans), so here are some of our favorite chimp photos for your viewing pleasure, reminding us how great these primates are:

Ten Things to Make Thanksgiving Day Much Better This Year

A Job Worse Than Unemployment