Recently it was announced that the Chinese province of Shenzhen will introduce a fine for people who miss the urinal in the public toilets.

Now anyone whose been into a public toilet and felt the shameful and degrading ankle splash of stepping onto a recently soiled floor is probably thinking this is a good idea. People who mess up bathrooms are dicks and they should be fined. But just for a second think about the logistics of introducing this system.

It’s not like anyone is going to be scooping up DNA off of the floor, for this to work you have to catch people in the act. Unless you pee siting down you may realize that this is a lot more creepy than it sounds. For this to work there is literally going to be a guy in China who writes “watches people pee” on his tax return. 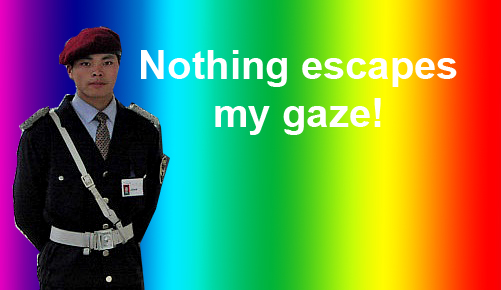 There should never be a guy who gets to do that. Look at the guy in that picture, we just Googled the word “Security guard” and we got a guy who could stare holes into your soul.

Now imagine if that guy’s only job was watching people take a piss. Imagine how annoyed and angry that guy would be. Now give him a taser and the ability to legally watch people take a dump.

That is too much anger and power for any one person to have. China, when the number of people being stabbed in the butthole by an irate security guard increases by 500%, don’t say we didn’t warn you. Because we tried. Honestly we did.