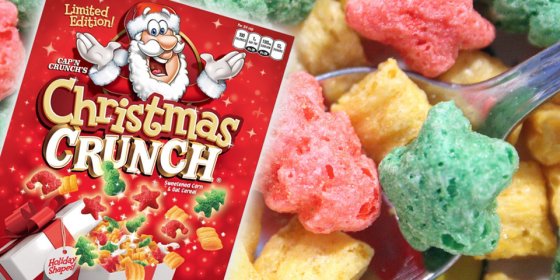 Christmas Morn’. The weary and far-too excited tykes break from their light slumber. Their little minds can think of nothing more than to race to the Tree and begin rending the wrappings to discover the Christmas treasures within. But, alas, these little children have parents. Parents who need coffee and shots of Drambuie to even kick into first gear in the morning, and the Holiday should be no different. So, it’s off to the kitchen for breakfast before anyone gets to tear into the goodies. What’s for eats for the kiddies? Why it’s Christmas Cereal, what else? Grab a bowl and a spoon and dig in!

What a festive holiday treat! Good old Cap'n Crunch, commander of the U.S.S. Bloody Gums, brings us phase one of his delicious cereal all decked out in beautiful Christmas colors! Oh, and who's that dressed to the nines as Jolly old Saint Nick? Why it's the Cap'n himself! Who wouldn't want a turn on a filthy, scurvy-ridden sea dog's lap to beg for Christmas gifts and a swatch of dry land? No one, that's who! 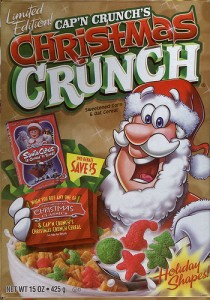 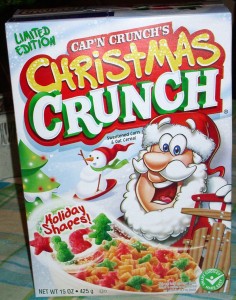 When the Cap'n dresses as the Jolly one for the Holidays, he need only head below-decks to the unused closet of former ship-mate Pare Noel, who has since been kicked to the sharks for attempted mutiny back in '64. Cap'n Crunch has to squeeze his cereal-fattened carcass into the red and white outfit that reeks ridiculously of rotted fish guts and Spiced Rum, but it's for the kids, ya know?

What do you get when you take dull, drab, tan circles and convert them to Decked out, Holy Christmas cereal? You get Dull, Drab wreaths! Yeah, they're still Cheerios and they're still pretty damn boring, but with the Holly Jolly motif plastered all over the box, it's just that much less boring! Go Christmas! 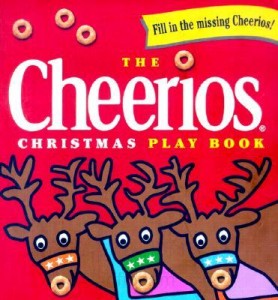 The very best part of this package design isn't so much the fact that Post has avoided any skermishes with other non-Christmas holiday celebrations by just going with the generic 'winter', but more the use of winter cave-man apparel for Fred and Barney. One assumes that the Flintstones and Rubbles were pretty familiar with warmer mammal pelts since the oncoming Ice Age was only a few seasons off, but it's just so charming to see it used on a box of cereal. 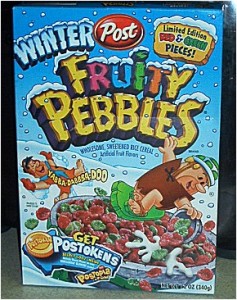 So the basic idea behind this re-vamped holiday breakfast treat is the simple fact that the loops of fruit froot themselves have been festooned with glittery, angelic sparkles! Well that and Toucan Sam sporting his rakish Christmas Scarf. He's always a hit at the Cereal Mascot Holiday mixer. 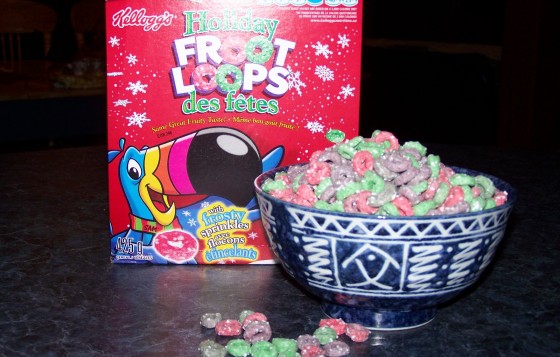 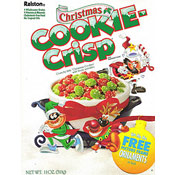 No other cereal on the market is more perfect for the Yule Tide transformation than Cookie Crisp. The standard cookie fare is either chocolate chip, sugar, or all chocolate, but this time around we have a flavor and a look similar to those pre-packaged, stale, nauseatingly sweet Holiday red and green tinned garbage cookies! Well thank goodness for that, I was getting bored of the one and only representation of that shit.

Proving that even elves love to celebrate Christmas. Oh, you didn't know that Snap Worthington, Dave 'Crackle' Crackman, and Eli Popowicz aka Snap, Crackle, and Pop were elves? Oh yeah. Years before you were born, they worked in the Snack and Beverage division of Santa's Toy Shop only to be excommunicated a few years later for selling company secrets to the Easter Bunny. Seriously. Look it up. 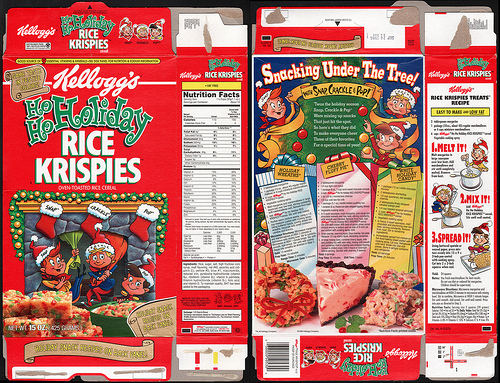 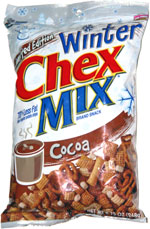 Though not technically a cereal, per se, it does contain Chex in such myriad forms as Chocolate and Frosted and who wouldn't want that plus pretzels, peanuts, bark, soy rods, potpourri, and marshmallows in their cereal bowls? Who, I ask you?

After their failure and subsequent capture during their tenure at Santa's Toy Shop, Snap, Crackle, and Pop did a stint with the Keebler Elves. The tree-dwelling midgets taught them all they needed to know about incorporating such sweetened confections as marshmallow and nougat into their famous crisped rice. Crackle was the first to figure out that butter, mallow, and Krispies would work out nicely in the dessert department. He lost a hand to the sticky mess, and the rest is history. 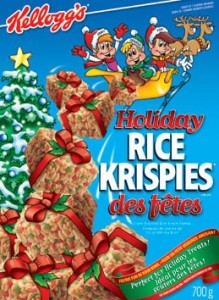 Poor Lucky. His days are filled with naught but constant chases and pointless hiding as kids from all over the world pay big money to hunt him like so much venison. And yet, as the Winter solstice approaches, Lucky still finds it in his heart to adjust the way his cereal looks to more entertain the very kids who seek to destroy him. Talk abut misguided. 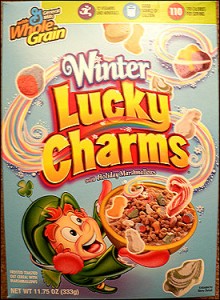