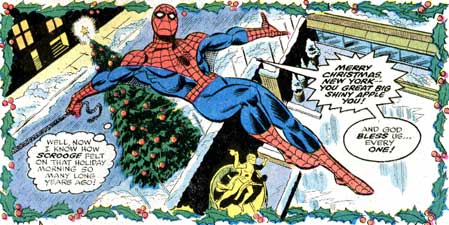 Even Comic Book Heroes and Villains celebrate the holiday! In fact, the appearance of Batman, Superman, The Hulk, or the X-Men in a Christmas comic has become something of a tradition. Here are Ten of the most popular stories (including Santa Claus, himself) over the years. Each is accompanied by a synopsis of said comic since I, for one, am not abut to go to the comic shop and track down each and every one of these. I just as soon eat a string of tree lights. Ho Humbug!

Here’s the skinny: “The main story features Ma Hunkle, Flash, Green Lantern, Hawkman and Wildcat and takes place on Christmas Eve. The final two pages – with Ma Hunkle, Star-Spangled Kid, Doctor Mid-Nite and Power Girl – take place some time later. On Christmas Eve, the old-timers of the JSA visit an old friend in New Hampshire, an old friend who is living in witness protection after testifying against the Yellow Mask Mob. This year, they have good news for her – the last relative of those she testified against has died and she and her children are no longer in any danger. They invite her, Ma Hunkel, the Red Tornado, to come and serve as the JSA’s museum curator, a role she accepts, filling it beautifully, acting as a support for the heroes in addition to her curatorial duties.” The Yellow Mask Mob? Fear and yellow do not mix. Well, it is DC after all. 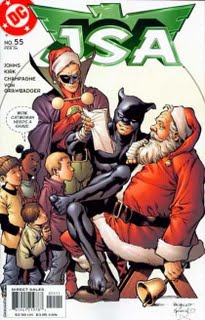 The synopsis goes like this: “With Rick Jones, The Hulk, and the Rhino. Rick entertains some hospitilized children with a Hulk adventure. The Christmas spirit has the Rhino down in the dumps and he figures that dressing up as Santa is his ticket to improved hand-outs. He’s actually hired on as a department store Santa and loses his temper which just happens to draw the Hulk’s attention. They battle it out until a young girl’s Christmas spirit calms them down and they settle things amicably.” Yeah. Hulk busting apart a mall fighting Santa. It don’t get much more awesome than that. 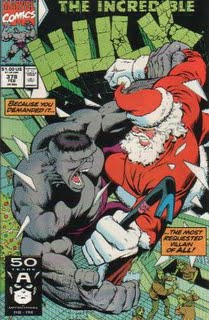 The lowdown: “The latest adventure of the Justice League of America begins not as a rescue mission, but as a meeting. As the World’s Finest team — Superman and Batman — arrive to pick up Santa Claus! With the orphans waiting for a visit from the man in red, St. Nick takes a moment to adjust his hat when: BOOM! Only the invulnerable body of the Man of Steel saves the Dark Knight from the bedroom explosion! The two heroes head forward to see what’s left…Superman sees that Santa Simpson is dead, and Batman knows that the key to his murderer is in the victim’s hand! This is far from an ordinary key, as they will soon discover! This is a challenging invitation which will soon have the world’s greatest heroes chasing after… “The Man Who Murdered Santa Claus!” I can’t imagine how a murdered Santa wouldn’t scar children. Stupid DC. 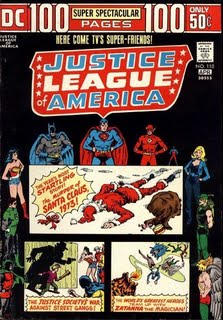 Check this out: “It’s Christmas Eve, and Ben Grimm grimaces in pain, as his left arm is being pulled by a mechanical device… With The Thing’s arm thoroughly examined by Reed Richards’ device, Mr. Fantastic applies cement foam to the concrete reinforcement rods which will serve as an impromptu cast, and The Human Torch’s flame speeds up the drying process. Reed tells Johnny to go easy on the heat, as to avoid cracking. Ben is less than pleased at having to wear a cast during the holidays, and believes that his ever-lovin’ fans will think less of him.” Yep. Ben’s worried that his cast will have his buddies making fun of him on Christmas. O but we should all have these inane problems. Stupid Marvel. 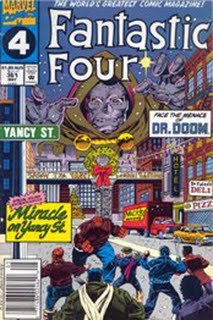 This is what happened: “The Teen Titans find themselves acting out the events of Charles Dickens’s A Christmas Carol when Tiny Tom Ratchet gets them mixed up in the secret dealings of junkyard owner, Ebenezer Scrounge, and Mr. Big, a smuggler with a strange device that recycles junk into “new” goods. With the Titans playing the roles of the Ghosts of Christmas Past, Present, and Future, Scrounge repents and helps them bring in Mr. Big and his gang.” Oh Teen Titans, who knew you were so literary. 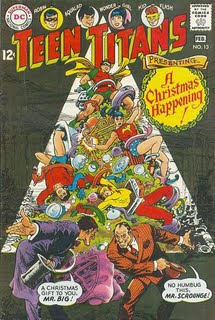 This is what you’ll be reading: “It is on an Autumn night, in the skies above Westchester County that Storm will come face to face with members of an ancient race which had once ruled the Earth, and who intend to rule the planet once more! The N’garai are the legendary elder gods, and one of them has attacked the X-Mansion, which is the secret headquarters of the X-Men. As the mutant continues to dodge the monsters’ attacks, there is a cairn below, whose powers sustain the evil creatures who threaten her teammates! Unless it is completely destroyed, the X-Men are doomed!” Just as convoluted as every other, non-Christmas-themed X-Men comic. 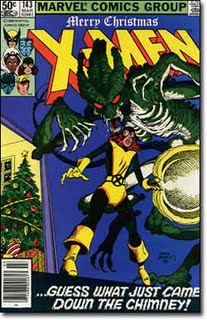 None of this makes sense: “Welcome to the Ambush Bug Stocking Stuffer following the adventures of Ambush Bug during the holiday season. Except Christmas doesn’t play a huge part here as Ambush Bug tries to solve the mystery of where Cheeks’s (Bug’s friend who has returned from death as a zombie) coffin has gone. Ambush Bug has also decided that going forward in a comic is not for him, so he leaves his book by page 33 to go back to page 19, totally voiding pages 20, 22, 23, 24, and 32. This is a job for Jonni DC, DC Comics’ Continuity Cop, who is a cute redhead with the body of the DC emblem.” Yep, he reverses time by wiping out the pages he didn’t like. Sounds like a Quantum Leap episode. 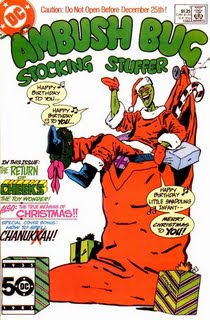 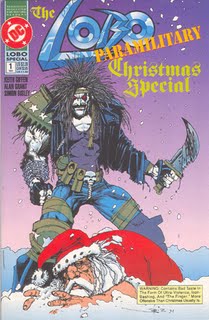 Here’s your gift: “Featuring Captain Ultra, Nick Fury, Ghost Rider, and Hulk, as well as a supporting cast of many of the Marvel favorites. Inside shows six different stories each focusing on the Holiday adventures of one or more of the cast in and around the Christmas Holiday. Especially funny -well, for a hero comic, at any rate- is the Ghost Rider story. Look for the Wolverine poster insert!” WTF! A Wolverine poster insert?! It is Christmas! 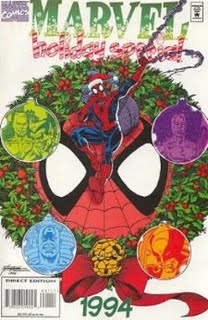 Here’s your goings-on in a big ol’ nutshell: “Any similarities between this story and Dickens’ “A Christmas Carol,” is purely intentional… for the novelist wrote about the spirit of brotherhood which begins anew when the star shines brightly at the holiday season — and this is the harbinger for The Dynamic Duo as they fight once again against crime, and tell an old tale in a new way… “A Christmas Peril!” In Gotham City, Millionaire Bruce Wayne and his youthful ward, Dick Grayson are doing some last-minute shopping on this Christmas Eve night… Bruce is bartering with a Christmas tree salesman, who is selling the last of his stock at $7.98, and at an adjacent Christmas tree lot, they are going for $2.00. Dick regrets that they didn’t go there first, and both watch as two hoods begin to pour gasoline over the holiday trees! Seeing that the thugs are lacking in Christmas spirit, Bruce and Dick change their garb, and Batman and Robin charge at the startled crooks! Robin’s punch sends one of them into the lit tree.” Isn’t that touching. 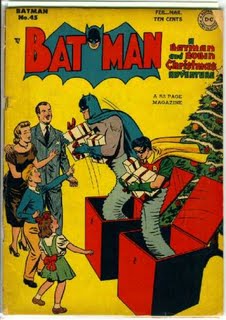