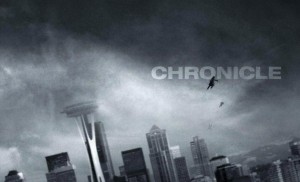 It’s fun to go into a movie theater with little to no idea what you’re in for. Heading into Chronicle, all I knew was it was about three teenagers who develop superpowers, which I saw once or twice on a commercial. Had I realized it was a found footage-type superhero tale the whole way through, I may have skipped it, but the hand-held style wasn’t as off-putting as it is in some other movies.

It was a cool idea to have the main character learn to telekinetically control the camera to pick up some steady camera movement and unique angles. Some of the shots come from a basically useless female love interest who also films everything for her vlog. While in the final scene, much of it comes via security cameras, onlookers filming the action and police cruiser dashboard cams. Several of the shots make you question why they’d be filmed, but others are so clever they make up for the bad ones.

The story itself is pretty basic, it’s the presentation that gives the movie a unique viewpoint. Three teenagers find a mystical glowy thing in a hole in the woods, which gives them the power of telekinesis. They hone the power enough to make themselves fly and perform extraordinary feats of strength. The movie drags in its first 15 minutes, as we are introduced to Andrew, who is the one ‘chronicling’ everything, in order to combat his father, who is an alcoholic and beats him regularly.

His mother is dying of cancer as well, and Andrew is a Peter Parker-type who gets bullied at school and is generally down on his luck. His cousin Matt is his only friend at school by default, while Steve is the most popular kid in school. As their powers grow stronger, Andrew begins letting his anger and desperation get the best of him which leads to a rift in the crew and comes to a head in the climax. Speaking of the final scene, it rivals that of big-budget comic book movies in scale, action and ultimate end, which was amazing considering the paltry by comparison $12 million budget.

Chronicle has few flaws for a movie written and directed by first-timer Josh Trank, who has already been tapped to direct the Fantastic Four reboot, and writer Max Landis (John’s son). The relatively unknown leads also turn in strong performances, but none more so than Michael B. Jordan, recognizable from Friday Night Lights and The Wire, who plays Steve.

The film starts slow, but is paced nicely and there are only a couple of distracting spots of questionable acting and minor plot-holes. The nosebleeds and underdeveloped love interest side-story could have been slightly embellished, but those are easily overlooked in what is a fun, new way of presenting the tired superhero origin story.