Motors > Game On With the Chrysler 200

Game On With the Chrysler 200 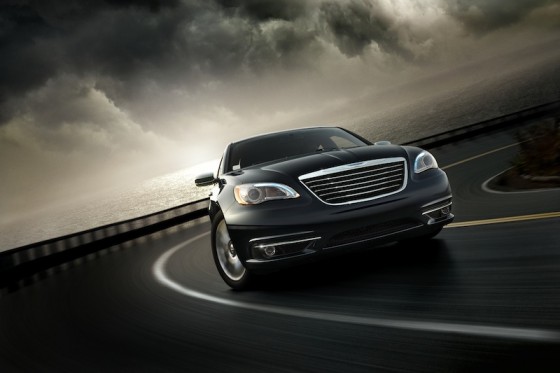 Recently, a couple of Gunaxin writers (along with Heather Brooks from Sports Girl and Jenna Mantis from Fumbling Forward) drove from Pittsburgh to Chicago in the new Chrysler 200 as part of Chrysler’s Game On Blogger Road Trip. Learn more about it, watch some videos, and enter to win “The Ultimate Football Fan Package” over at Chrysler’s Facebook Page. Here is a bit of a preview :

The 200 is basically Chrysler’s replacement for their current mid-sized sedan, the Sebring. Which, if you’ve rented a mid-sized car or convertible in the last 14 years, you’ve probably had the pleasure to drive. The Sebring is not considered to be one of Chrysler’s standout vehicles with it’s underpowered 4 cylinder engine and drab interior. Basically the only exciting feature of the car was that it came in a convertible model. Chrysler wants to change all that, and we had the chance to see if they succeeded.

It certainly looks much nicer than the Sebring. Both the front and back of the car have been redesigned for a more modern look, though you might notice that the roofline remains unchanged. The Interior has also be upgraded significantly. The leather seats are comfortable and the soft rubbery texture of the dash is much nicer than the hard plastics of it’s predecessor. The controls on the dash have an updated look accented by the retro analog clock in the center. The interior was probably one of the most striking updates that we noticed right away.

The road trip took us from Pittsburgh to Cincinnati, then Indianapolis and finally onto Chicago in some very cold and snowy weather. The car handled the snow very well as evidenced by the fact that our 200 was not one of the many that ended up in a ditch on the side of the road in the middle of Ohio. The car also handled doing doughnuts very well in the Indianapolis Motor Speedway parking lot. Just be sure to disable the traction control before you attempt them or you won’t be skidding as much as you’d like. This video summarizes our trip fairly well :

What took me most by surprise in this new car was the power. The Sebring certainly didn’t have 283 horsepower. We didn’t have too many opportunities to test out the performance of the car, what with the snow and all. I can tell you however that if a tractor trailer cuts you off on the highway and you need to catch up with another car, you’ll be able to, and in a hurry. Here is the official word on the new engine : 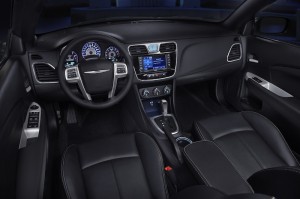 Our car also came equipped with some advanced electronics from Mopar for us to play with. The most interesting of which was the built in WiFi. The car provided a WiFi connection through Chrysler’s UConnect Web, which is an EVDO router. The WiFi provided allowed us to remain online throughout the trip, but if your driving habits include commuting to and from work on your own this could be an impractical feature. I could see this being a great feature for a family with kids or for someone who needs to stay connected on something more than just a cell phone. Obviously it was quite handy for a couple of bloggers on a road trip.

The GPS system in the car works well, a few strange directions in the middle of Cincinnati not withstanding. It wouldn’t allow us to enter an address while the car was in motion, but you can select from a list of favorites. I think this is a safety feature built into most new cars, but it would be nice if the car would detect if there was a passenger present and allow addresses to be entered at that point.

Editor’s Note : I’m not a fan of audible turn by turn directions. So when I yelled, “Shut-up Bitch” at the Navigation System, I was pleased to find out that it responded to voice commands, and actually muted itself. 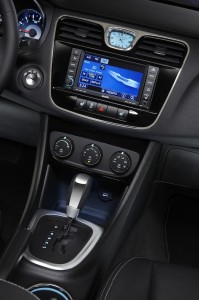 Another feature of Chrysler’s UConnect system is the Voice Command with Bluetooth. What this allows you to do is setup a Bluetooth connection with your cell phone using voice prompts so you can setup the connection while you’re driving. The process was actually pretty painless and we had an iPhone connected in a fairly short amount of time. The main problem I had with the system is that the voice prompts were the only way to setup the Bluetooth connection, buttons would have made the setup much simpler and easier, even if they were only available when the car was not in motion. After getting the Bluetooth setup, calls were clear and the people we were talking to had no problem hearing and understanding us. The system also attempted to allow us to play music from our iPhone through the stereo with our Bluetooth connection, but unfortunately this proved problematic. We believe it was an incompatibility with the iPhone.

The stereo came equipped with Sirius Satellite Radio, an auxiliary input and 2 USB ports. We used the satellite radio quite a bit during the road trip, but I usually listen to my iPhone in the car so we had to try it out. The experience here was a little disappointing. Plugging the iPhone into the upper USB port would charge the iPhone but neither the iPhone nor the stereo gave any indication that it was connected. Plugging it into the lower USB port would result in the stereo attempting to connect to the iPhone and failing and the iPod app telling us that it was connected but at that point we could no longer control it from the iPhone itself.

We tried this same experiment with an iPhone4, iPhone3GS, and iPod Touch without success. We did finally get it to work with an older iPod Nano. After talking to the Chrysler folks, we learned that because we were driving a pre-release 200, our stereo was using an outdated version of the software and our iPhone should work with a never version. At least the aux port worked properly.

Overall, I’d say that the new Chrysler 200 is definitely a step up from the Sebring. With the new look and feel, 283 horsepower engine and available high-end electronics, if you’re in the market for a 4-door sedan Chrysler has a car that worth checking out.

Why didn't they let us drive the Convertible in the snow?

In accordance with the FTC Guidelines, We are disclosing that our time, travel and accommodations have been compensated by Chrysler Corp. for our participation in the Blogger Game On Road Trip campaign. Although we have a material connection to Chrysler Corp., any publicly stated opinions of Chrysler Corp. and their products remain our own. The NFL is not sponsoring or affiliated with us, our trip or our postings.