Sports > Football > Chuck Pagano Will Fire You Up

Chuck Pagano Will Fire You Up 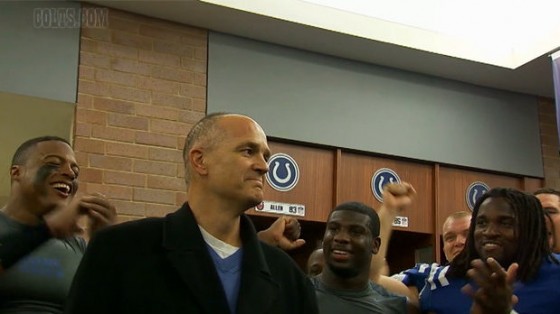 When the story came out that Colts’ coach Chuck Pagano was attending their week nine game against Miami we were happy to hear it. Pagano is a likable, well-respected coach, and his battle with leukemia has been well documented. We expected video of him waving from the owners box, but were surprised to see him head to the locker room after the Colts’ win.

After a slow start, Pagano’s talks of defeating this disease, then promises to dance at his daughters’ weddings and win Super Bowls. The emotion can’t help but get us inspired, and you can see the effect it has on his players as well, as they join in a cheer for t

While hack sportswriters will tell you that the Colts are only winning for Pagano, their success is better attributed to improved talent and coaching, along with an easy schedule. The Colts are being outscored by opponents by three points a game, but that is a touchdown improvement over last season. Rookie Andrew Luck, who set a rookie record for passing yards on Sunday, is a marked improvement over Kerry Collins, Dan Orlovsky and Curtis Painter. Meanwhile, the scheme implemented by Pagano, the former Ravens defensive boss, is allowing three fewer points a game than last season. The Colts still aren’t a good team (they rank 23rd in both offense and defense) but they are winning the close games. With a schedule that includes Jacksonville, Buffalo, Tennessee and Kansas City over the second half of the season, the Colts have a good chance to finish the season 9-7 or better in a weak AFC, and make the playoffs. While playing on emotion won’t carry them far, the Colts look like a team that will be playing relevant games for the rest of the season, thanks in part to their coach.