So, you fancy yourself a Horror Movie fan, do ya? You like that Freddy guy and have seen all the Saw flicks in the theater? Wow, impressive. Hate to break it to ya, junior, but you just can’t consider yourself any kind of true Horror Fan until you’ve been to a Convention. And I don’t mean just any convention featuring the likes of famous and well-paid faces from standard, watered-down horror. Oh no, I mean a Convention where everyone you meet is an aspiring filmmaker themselves with maybe a few underground, self-produced movies under their belts, most of which you’ve likely never heard of. Yeah, the festival you need to attend is something like this past weekend’s (October 1-3) Cinema Wasteland in Strongsville, Ohio just outside of Cleveland, at their Holiday Inn. 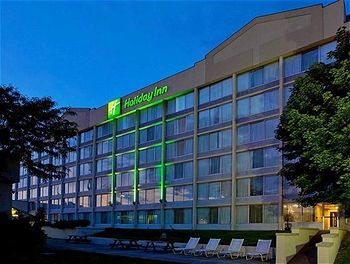 Now unless you know someone who can introduce you to the wonders that await you at such a Convention; a pal who can warm you up for years by feeding you B-Level horror films and keeping you on a steady diet of the people who made these films, you really have to do a lot of searching yourself. Your local store doesn’t always offer up a vast array of underground horror cinema, though the likes of Troma (Toxic Avenger) and Low Budget Pictures (Ski Wolf) have found their ways to places like WalMart lately. So, unless you know where to look, it helps to have a friend to keep you in the flow. My buddy Doug happens to be such a friend and he’s been into these kind of movies for ever. I’ve only been a fan for about ten years or so but I’d never had the opportunity to attend a Festival. Until now. 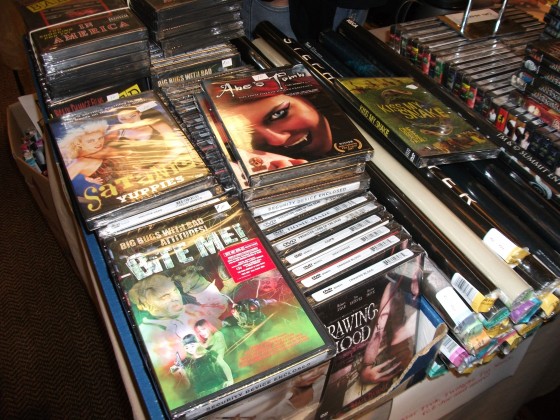 Before I move on with some pics and video, let me give you a rundown of just who was there. I can assume, if you are any kind of horror fan, some of these names will definitely ring a bell: Gore-Master Herschell Gordon Lewis (2000 Maniacs, Gore Gore Girls), Tom Sullivan (FX Master on The Evil Dead and many more), S. William Hinzman (The ‘First Zombie’ From 1968’s ‘Night of the Living Dead’), Camille Keaton (‘I Spit on Your Grave’), and plenty more maybe not quite as well known. Of course there were booths a plenty hocking everything from classic posters to plaster face molds of horror icons to T-Shirts to toys to soap, and every damn thing in between. Okay, you get the idea. On with some pics!

Actually, before I post any stills, here are 2 videos of roughly 90% of the show. Sure I missed a few spots, but it was insane attempting to weave my way through the crowd and attempt to video at the same time. At least you’ll get the basic idea. It begins just inside the main door with the ‘Mike Watt and Amy Lynn Best’ table and ends, in the distance, with the Troma set. No, Lloyd Kaufman wasn’t there. He canceled at the last minute. Oh well.

As you can see, the place was literally festooned with things you could buy. I managed to make it out with three kick ass T-Shirts (Happy Birthday to Me, Demons, and Return of the Blind Dead) and a few zombie finger puppets and rubber ducks of the living dead for my kids. Okay, on with a few pics! 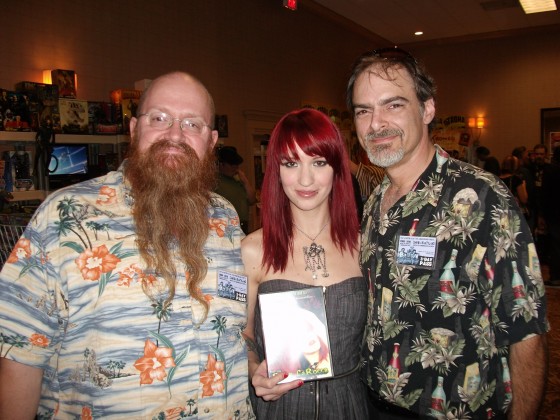 This is Doug (bald and beard) and Chris - the cats I went with- sandwiching B-Movie starlet Ruby LaRocca who starred in a film we watched called Zombie Christ. Yes, you read that right. 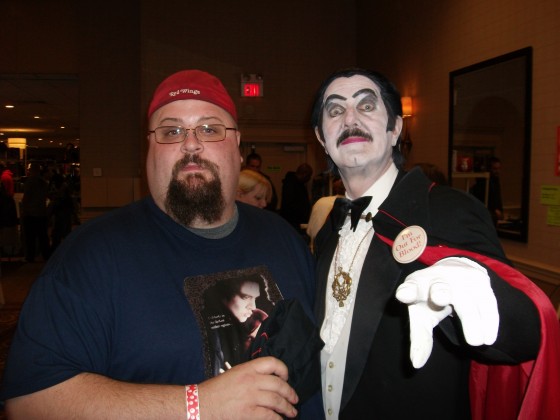 This is me (not the vampire) and Count Gore DeVol (countgore.com). He's a horror host on TV. Look how proud I am! PS: That is NOT a Twilight shirt I'm wearing, by the way. It is, however, a Taintlight shirt. Trust me, look it up. 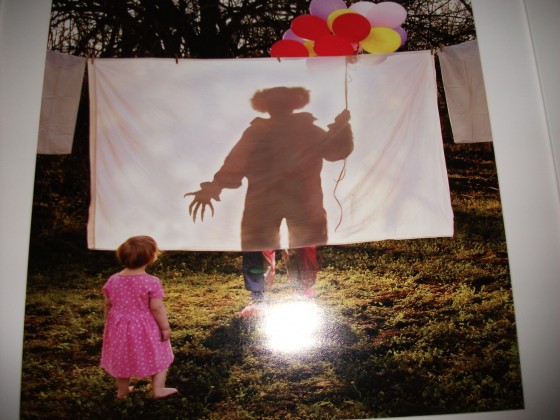 This is a horrible picture of a clown. Well, the picture isn't horrible, but clowns are freaky. Anyway, his name is Josh and he's done work for Rue Morgue and Fangoria magazines. 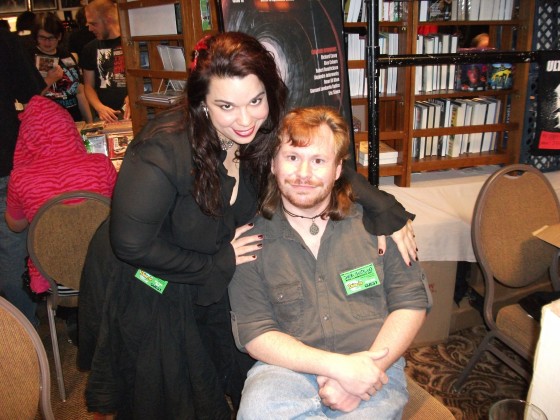 This is Amy Lynn Best and Mike Watt, both of whom have appeared in such films as The Resurrection Game and Feast of Flesh. 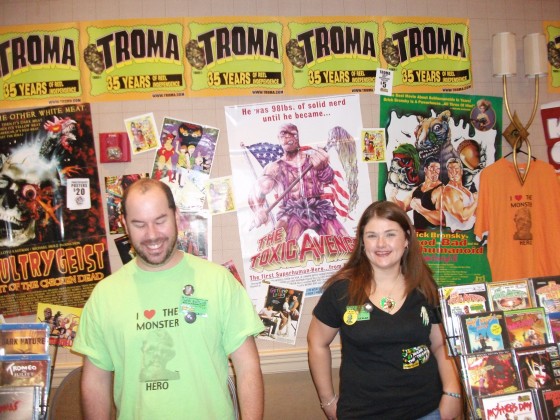 These are some of the goofy bastards at the Troma table. As I said, Lloyd had other obligations, but we had fun anyway. 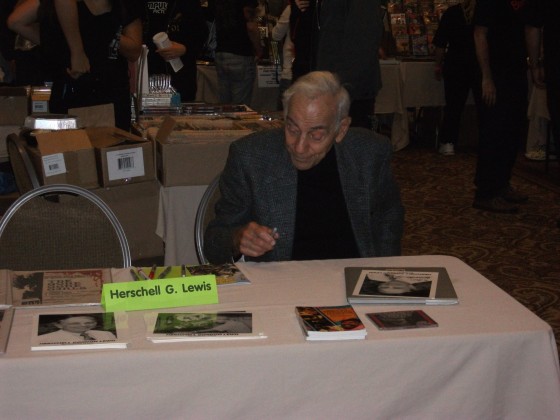 This, as you can see by the name tag, is Mr. H. G. Lewis. If you have never seen such flicks as 2000 Maniacs, The Wizard of Gore, or Color Me Blood Red, you are no fan of gore. He was there promoting and showing his newest flick, The Uh-Oh Show. 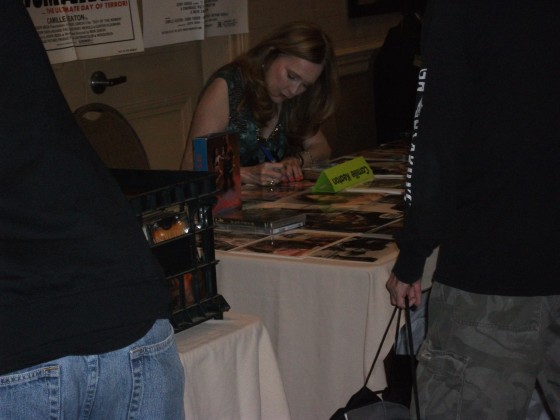 This comely lass is Camile Keaton. She still looks pretty good for having starred in I Spit on Your Grave in 1978. The only trouble here was that she was literally the only guest charging over five bucks for an autograph. Twenty bucks for the John Hancock from a chick who is relatively unknown? Yeah. Still got one. 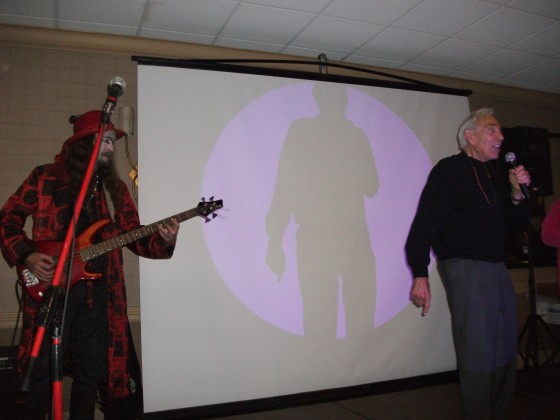 Believe it or not, this is Herschell Gordon Lewis singing, 'The South Shall Rise Again' from 2000 Maniacs. On the bass is A. Ghastlee Ghoul, shock host. 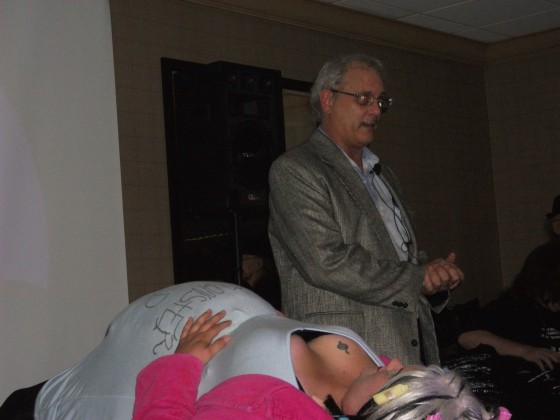 And this is FX guru, Tom Sullivan about to deliver a C'Thulhu baby from a 'pregnant' minion who has been with 'monster' since the 2009 show. Again, you read that correctly.