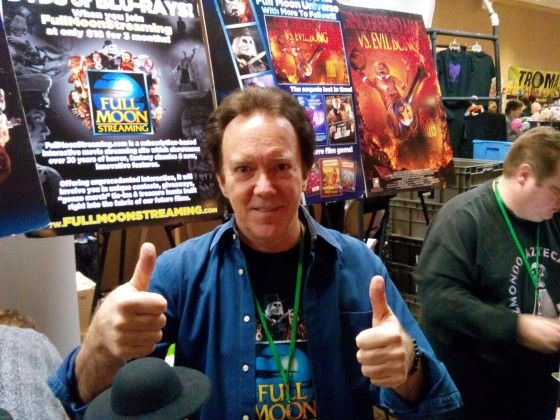 Let’s say for a second that you, my curious audience, is interested in Horror Movie memorabilia, hard-to-find posters, movies, collectables and the like, and potentially meeting a favorite obscure actor or actress. And let’s just assume that you’re not really interested in the ridiculously long lines, stuffy Holier-than-though celebs, and pricey autographs. Well then, good people, might I suggest getting your asses to Cinema Wastelan in Strongsville, Ohio. Trust me, from the minute you walk into the even area in the Holiday Inn, you will be hooked for life. From the word go (Friday at 5pm on the first weekends in both April and October), you’ll notice that this place is just a bit different from any and all other conventions you might have attended in your lives. 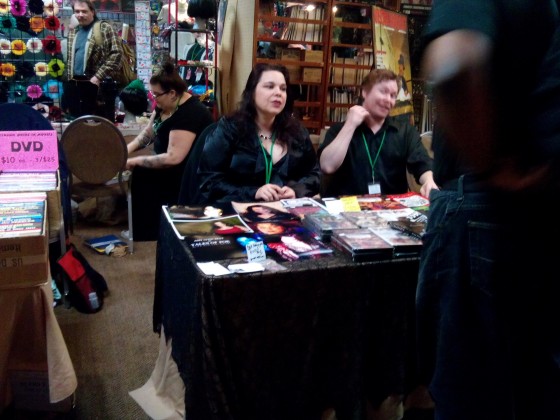 First off, the people absolutely go out of their collective ways to be nice, kind, and excessively friendly. Why? Because to many, what they are offering in their booths is their very livelihoods on display. That’s right: many don’t do much else than what you’ll see before you. Everything from personalized merch to their own directed, produced, and edited films, to special appearances, these people are what you see. And that’s a good thing. You see, CW isn’t about gouging the consumer, because they know it’s you, as the consumer, who ultimately supports their causes and this keeps prices low. It’s a win-win for everyone! But I strayed a little off topic here: what it really does is keep everyone generous, genuinely thrilled to see you, and always ready to pose for pics and shake a hand. Everybody -with the caveat of a scant few being dicks- is amazing. 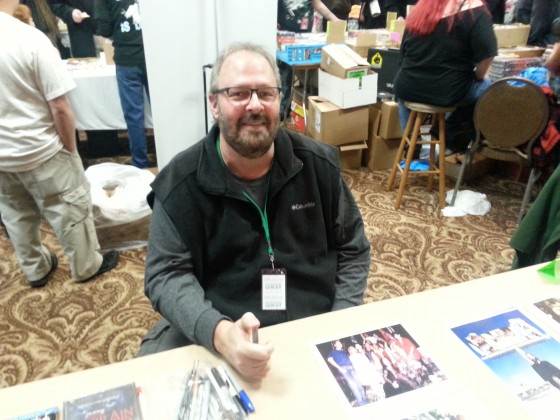 Kevin Tenney, director of Witchboard and many, many others. Great guy!

So what about those prices, you might be asking yourself? Well, I’ll give you a few examples. Many people attending a smaller venue like Cinema Wasteland are probably rocking a budget. I know I am, but that never stops me from finding and purchasing everything I set out to get. My favorite thing to buy is T-Shirts. Now, at a convention such as this one might assume shirts to be somewhere in the 30 dollar range. Because why not? These shirts are of a quality that deserves the higher price tags. But let me tell you, I couldn’t find one higher in price than 22 dollars. Sure, it’s not like I was actively seeking the extravagance… but I did shop. Anyway, this is just one example of how these fine folks keep their items at a scale where just about anyone can afford more than one thing. And above even all that, every table (including the big one right as you walk in) has something to give away. So even if you attend this show with nothing to spend (not a feat I’d recommend, personally) you’re still going to find lots of free swag, too. I also like making sure I don’t leave empty-handed for my wife and kids. Granted, they aren’t horror movie fans per se, but I can still manage to get them each something a little less… uh, scary for under 10 dollars, or, a lot of the time, free! It’s true, there is just so damn much that’s affordable for anyone and everyone. 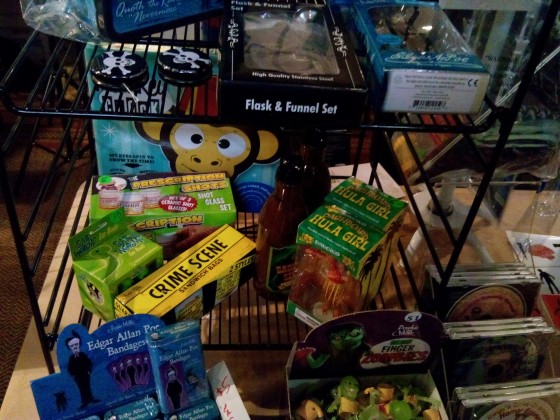 Just a small sample of the merch at Cinema Wasteland.

The next big thing this show offers is the guests. Well, to me it’s a close second in what I’m excited about, but for others it’s likely first on the agenda. This year packed in the faces, and some were just about the coolest people I’d ever met. Let’s see, John Amplas of Creepshow and MARTIN fame was in the house and as nice as you’d ever want, Tom Atkins from everything from Night of the Creeps to Halloween 3 was there just being awesome, Charles Band of Full Moon Entertainment was doing some of the coolest things I have ever seen from signing folks up for the new Full Moon streaming on-line where one can get their fix of Puppet Master and every other film in the library, to staging a live show where the story about Gary Busey in his Gingerdead Man roll brought the house down,  to the always kooky and hysterical Lloyd Kaufman, shameless purveyor of Troma Pictures who, for my few minutes of doe-eyed fascination was maybe the coolest cat in town.So you see what I’m saying about some guests, and this tiny list barely scratches the surface. For my money, there is no better place to get up close and personal with some really great faces from the horror genre. 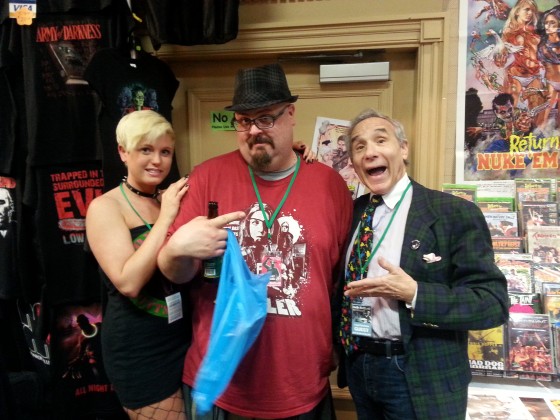 Me and Lloyd Kaufman and some… uh… actress.

Being held in a Holiday in for the past 14 years and growing in leaps every single six-month event has proven one thing: the spaces can get seriously cramped. Friday night doesn’t really end till well after 2 am once the after-event shows really kick into gear. Right next to the main even hall are two other screening-type rooms where all manner of films, viewings, Q and A’s, and panels go on throughout the day and night. So, back to Friday, there’s always some kind of epic show where all manner of debaucherous activities go on. This year was certainly no exception and featured both a full-on Burlesque Show and Charles Band’s Full Moon bit both of which amazing in their own completely different ways. Follow that up with a Bill Zebub flick that is sure to offend every living human on earth, and you just can’t contain the fun. Then there’s Saturday night where A. Ghastlee Ghoul puts on his live entertainment where Sally the Zombie Cheerleader and her cohorts throw down the gauntlet and really give quite possibly the best show CW has to offer.And these just touch on the events stuffed into the weekend. Don’t expect much in the way of sleep. Oh, and on a side note: wandering the event with alcohol is not only acceptable, it’s highly encouraged. And, finally, as I was saying, it gets sardine-packed in there. Trust. 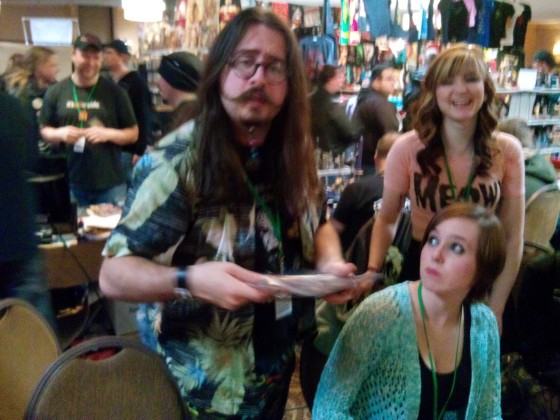 Henrique Couto and his leading ladies telling me to get off his lawn.

And that, kids, is Cinema Wasteland in a poorly constructed nutshell. Look, no matter what I write or say, it’s never going to do justice to actually being there in person. This was my fifth time and I have no problem admitting that I look so forward to going to this show that I’m already planning for next April. I personally can’t do every six months, but if you can get out there in October, all the ticket and guest info is right here: www.cinemawasteland.com. Trust me, you will never forget it.