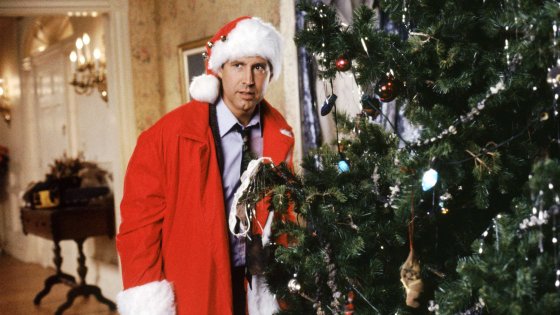 Many many things scream classically iconic during the Christmas season. The image of Santa Claus in his sleigh with his reindeer tugging ahead, holly and mistletoe, bells and lights, and, of course, the Christmas Tree. Good old tannenbaum itself; the conical-shaped hunk of forest you displace from the earth and jam into your home till it dies. Festive! What’s the history of the Christmas Tree, you ask? Settle down, it’s right here in this Wiki article. So enjoy that. But that’s not what I’m here for, a damn history lesson. Oh no, this time around we’re gonna explore the rich and diverse Pop Culture universe and its many uses of the classic Christmas Tree. So enjoy and Happy Holidays, freaks.

Everyone knows Charlie Brown is a hapless knucklehead who means well far more frequently than he acts upon it. He is the absolute epicenter of his circle of acquaintance’s jokes, the target of everyone’s ridicule, and the world’s most prolific loser. Yet, he has an innocence about him that almost cracks the shell of shame that encircles him and really prevents him from ever being fully mired in self loathing. Also, he once picked out what might be better referred to as a Christmas Branch. Quite possibly the most poignant and perfect scene in Christmas Special history.

The Grinch and his wicked lies

The Who’s down in Whoville are contemptuous little snots and The Grinch has had just about enough of their cacophonous Christmas crap. So, the only real way to combat a dire situation is to attack it from the inside. And that’s just what he does. Dressed to look like the Who’s version of St. Nick, The Grinch begins systematically removing every shred of the holiday from Whoville. But his plans are nearly destroyed when he’s thwarted by Cindy Lou Who, who is no more than two. Thank goodness for that because she’s also excessively gullible.

The Firs get their comeuppance

Did you really think for one second that no one was crazy enough to make a horror movie that focuses completely on trees wreaking havoc? Well, I certainly hope you didn’t think that because that’s just what Treevenge is! The to-be Christmas Trees have had enough and its high time for a little payback. Check out the fifteen minute horror short, Treevenge!

Clark Griswold vs. The Christmas Tree

Speaking of people always finding themselves in the wrong place at the wrong time, here we have good old Clark W. Griswold. Clark has made a habit of taking his family on less than stellar vacations, but this particular Christmas he’s decided to hang up his keys and stay home. Smartly so, one would think. Ah, but one hasn’t met the whole of Clark’s family. Soon the tree is up and trimmed, and then the fun really begins.

Is that Kristen Chenoweth?!

Yeah, Deck the Halls was a pretty lame excuse for a Christmas movie all in all. But, as far as classic Christmas Tree scenes go, this one is pretty funny. Besides, whenever you can pair Ferris with The Penguin, you’ve got comedy gold.

“Every time a bell rings…”

We all know it, and we all love it: It’s a Wonderful Life. The timeless Christmas classic from Frank Capra starring the amazing James Stewart. The whole movie is like a horrible nightmare where George is tossed around a possible reality where he just plain doesn’t exist. Even though it’s what he wanted in the first place, it turns out to be a terrible idea. But it all works out in the end. As you can see.

Mickey and Pluto and their pest problem

So Clark Griswold may have had one squirrel in his tree, but Mickey and Pluto have two chipmunks! Now that’s a mess. In this Christmas classic, Mickey completely shuts Pluto down believing he’s just going crazy, but soon the mouse realizes what’s going on… much to Pluto’s chagrin.

The Tree in Rockefeller Center and Kevin

Home Alone 1 and 2 are holiday must-sees in my book. In the original, the McCallister’s forget Kevin as he was banished to the attic the night before, and head to Florida without him. Trouble ensues. In the second outing, Kevin boards the wrong plane and winds up in New York instead of France with his family! Peg it up to parental irresponsibility or whatever, but it does lead to a load of humor. But, the most prominent tree scene is at the end when he reunites with his mother. The scene is crappy, but it’s there.