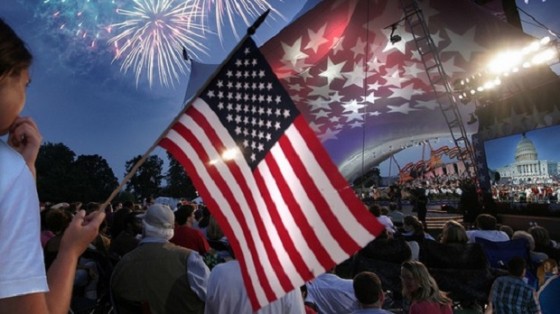 Before we even begin, let us clarify by saying that these songs are within the literal sense of the word ‘Classic’. That is to say, almost classical, if you will. You will not find any Red-Neck, down-home, nitty-gritty country music songs on here… not that there’s anything wrong with those, in small increments. And, just the same, you won’t find and hard rockin’, ass-kicking guitar anthems on here either. Again, for no other reason than that’s just not what we’re going for here. Okay? Everyone clear? Good. Moving on.

These songs are typically, especially now a-days, played via orchestra before, during and after the Fourth’s fireworks celebrations. Yes, we know there are many more songs that also represent America and our feelings toward her, but we chose these nine as examples that you might want to play while you’re trying not to burn down your beer tent with sparklers. Enjoy your independence folks, because, much like everything else, it can be fleeting. Keep that in mind when you proudly stand with hand over heart celebrating just how damn lucky you are. Seriously!

The Caissons Go Rolling Along

My Country Tis of Thee

The Battle Hymn of the Republic