It occurred to me while working on my list of Midget actors, that there are many different types of midgets (errrr Little People) in television and film. It also occurred to me that these little guys typically appear in packs. I guess when you are that small, there is strength in numbers. So this article is an attempt to try to wrap my hands around all of the types of little people. I don’t claim to be an uber movie dork, understanding all of the different races, and their physiological differences, so go easy on me with your critiques.

We’ll start simple with Dwarfs. Apparently a Dwarf is a legendary creature, and “little people” are real people with a medical condition called “dwarfism”. Seems like semantics to me, so we’re just

going to call them midgets, because no matter what, they are going to be mad at us. At least there aren’t very many of them, and they’re really small. The most famous Dwarfs are those seven lucky fellas that get to hang out with Snow White. However Dwarfs and Dwarves (who knows what the hell the difference is) also appear in middle earth in such contexts as Lord of the Rings, Warcraft, Warhammer and Dungeons & Dragons. This is where all of the dorks swoop in and tell me how stupid I am. Essentially these guys are little, tend to have beards, and for some reason carry hand tools of various types. 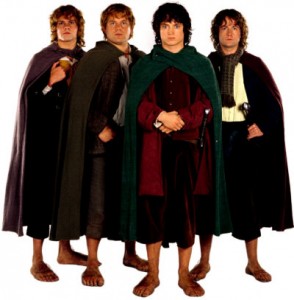 From here I guess this is a good time to move on to Hobbits, which are apparently just a figment of J.R.R. Tolkein’s imagination. From Wikipedia, “In J. R. R. Tolkien’s legendarium, Hobbits are a diminutive race that inhabit the lands of Middle-earth. Known as “Halflings” to most and “Periannath” by the Elves, the word “Hobbit” is derived from the name “Holbytlan” which means “hole-dwellers” in the tongue of the Rohirrim”. Ever wondered if there was a list of all of the Hobbits? Yeah, there is.

This of course brings us to Elves, which in Tolkein’s world aren’t exactly midgets, so we’ll focus on the other type of elves instead, Santa’s elves. “In the United States, Canada, the United Kingdom, and Ireland the modern children’s folklore of Santa Claus typically includes diminutive elves at Christmas; green-clad elves with pointy ears, long noses, and pointy hats as Santa’s assistants or hired workers. They make the toys in a workshop located in the North Pole.”

Now to me, Santa’s Elves look a little something like Gnomes, but I guess bigger. These guys apparently lives under ground. Gnomes don’t make Christmas gifts for you, instead they do your gardening, steal your underpants, and try to sell you airline tickets. Some people would also tell you that GNOME is a desktop system for your linux computer. Hopefully now you are thoroughly confused. Onward…

So what else is small, lives underground, and looks a bit humanoid? How about the Fraggles. I can hear it now, “How dare you interrupt this delightful look through the Dungeon Master’s Manual with the mention of something fake like a Fraggle!”. From Wikipedia, “Fraggles, tiny humanoid creatures about 18 inches tall, come in a wide variety of colors and have tails that bear a tuft of fur on the end. They live in a system of caves called Fraggle Rock that are filled with all manner of creatures and features, and which seem to connect to at least two different worlds that exist in different dimensions of time and space. Fraggles live a very carefree life, spending most of their time playing, exploring, and generally enjoying themselves.” Sounds fun to me.

Another group of fun loving midgets are the Smurfs, a fictional group of small sky blue creatures who live in Smurf Village somewhere in the woods. They may all be communists, but these little guys sing all day long while doing their work. Everything was always extra Smurf in Smurf village, even if they did get copied a bit by some other midgets, the Snorks.

Basically just the underwater version of the Smurfs, the Snorks are a race of small, colorful, fictional beings that live happily in the underwater world of Snorkland. They have snorkels on their heads, which are used to propel them swiftly through the water. The cartoon was relatively successful and has a considerable fan following, but the characters never became a merchandising success.

Which brings us to another group of midgets that seemed to be so damn happy, the Munchkins. They first appeared in the 1900 novel The Wonderful Wizard of Oz, in which they are described as being somewhat short of stature, and wear only blue. They are probably better known from their depiction in the 1939 film The Wizard of Oz, in which they are played by adult proportional dwarfs, dressed in brightly multicolored outfits, and live in Munchkinland. They are apparently a merry singing folk, as they perform “Follow the Yellow Brick Road” in the movie. However that rumor about one Munchkin committing suicide in the background is just an urban legend.

Another series of movies which seems to depict singing and dancing midgets were the Star Wars flicks. The The Return of the Jedi prominently features Ewoks, who appear as stocky, sapient bipeds which stand about one meter tall. They have flat faces, are completely covered in fur, and have large jewel-like eyes. Ewoks live high among the trees of their home moon’s forests, in villages 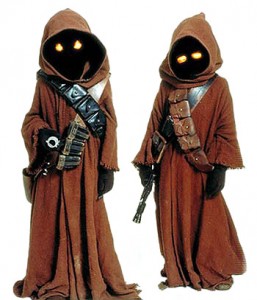 built on platforms between the closely spaced trees. Despite what purists will tell you about their role, I thought the Ewoks were great. So screw you Star Wars snob. In a New Hope, the Jawas played a prominent role, with their singing of “dink, dink”. Oh wait, that was Space Balls. The real Jawas were typically short humanoid natives of Tatooine. They were passionate scavengers, seeking out technology for sale or trade in the deep deserts in their huge sandcrawler transports.

Finally we come to my all-time favorite midgets, the Oompa Loompas. Oompa-Loompas are creatures featured in Roald Dahl’s books Charlie and the Chocolate Factory and Charlie and the Great Glass Elevator. They come from Loompaland, which is a region of Loompa, a small isolated island situated in the Pacific Ocean. In the book, they are the only people Willy Wonka will allow to work in his factory, because of the risk of industrial espionage. They are only knee-high, with astonishing haircuts, and are paid in their favorite food, cacao beans. In popular culture, they can be referred to as small people. I’ll pretend like that 2005 version of Charlie and the Chocolate Factory never happened, and instead focus on the real deal, Willy Wonka & the Chocolate Factory from 1971. This is another group of midgets that seemed to be fond of singing.

It sure seems like there is no shortage of parts for Little People to play in the entertainment industry. According to my spell checker, about 20% of the words in this article are made up. So apparently none of this crap really exists. I know I left off a few other groups, like the Sontarans or Lilliputians, and I am sure plenty more that readers will complain about. If I left off your favorite, leave me a comment with some information, and tell me what a dumb ass I am. Thanks