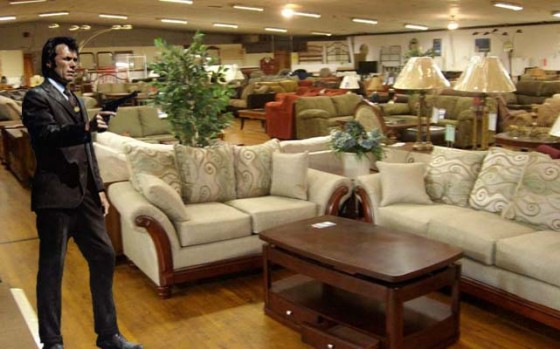 You might be thinking legendary actor/director Clint Eastwood is too old and too rich to give two poops about a furniture store using his name and likeness to hock their crap, but you’d be wrong, punk.

The Oscar-winning actor and filmmaker has sued a company called Evofurniture, as well as a website called Inmod.com and its domain name owners Alan Finkelstein and Casey Choron, for allegedly offering for sale entertainment centers, ottomans and chairs named after one of the most iconic Hollywood figures of all time.

Nothing a right turn from Clyde won’t fix, eh? Anyway, these would-be criminals have also taken a shine to inserting some of Eastwood’s more famous films into their promotional materials.

“When you’re invited into a person’s home, you get to see the good, the bad and the ugly. When visitors come to your home, the Clint 47” Entertainment Center makes your family room alone look like you live in a perfect world of a million dollar baby.“

Hey, I love movie title puns as much as the next blogger, but messing around with a guy famous for killing, maiming and beating the shit out of bad people sounds like something a rookie would do. So, unless these cyber bandits want the enforcer to deliver a sudden impact that sends them straight to heartbreak ridge, I suggest they quit walking a tightrope and avoid the line of fire. See how fun that is? I just hope Clint doesn’t read this. Although, getting sued by Dirty Harry would be kinda awesome.