Humor > News > Clown Gets Naked and Solicits Trucker for Sex

Clown Gets Naked and Solicits Trucker for Sex 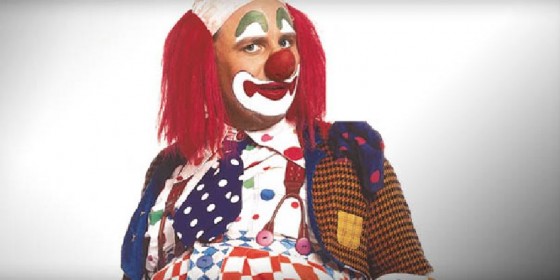 It goes without saying, but times can get pretty hard for an old feller trying to make it in this world as a clown. So hard in fact that some of these fish-eyed degenerates even have a go at truck stop prostitution in order to make ends meet. However, hanging around rest stops and convenience stores in hopes of scoring a few bucks by letting a burly trucker roll his wiener around in your mouth is not only rock bottom – it is illegal, too.

Just ask the New Hampshire police who earlier this week say they arrested child entertainer and clown extraordinaire James Vosolo, 46, after he jumped naked into an unsuspecting trucker’s cab at a rest stop just off Interstate 95 and asked the driver if he wanted to have sex.

According to police, the truck driver pretended to be interested in homo-the-clown’s indecent proposal and suggested the two meet up at a rest stop further down the road. Yet, when Vosolo stepped out of the big rig, the trucker called police and tipped them off about the naked man attempting to sell his fudge tunnel in the rest area parking lot.

When police finally caught up to Vosolo, he started chucking narcotics out of his vehicle before making an effort to pull over. But when he did, officers noticed the only thing the man was wearing was thong underwear and a pair of scuffed up clown shoes.

After searching Vosolo’s vehicle, officers uncovered a couple of jelly dongs and some Halloween masks. Vosolo was arrested and charged with indecent exposure, assault and battery, failure to stop for police, marked lanes and disorderly conduct.

We’re going to go out on a limb and say that you might want to think twice about hiring this clown to make balloon animals at your child’s next birthday party. You have been warned.