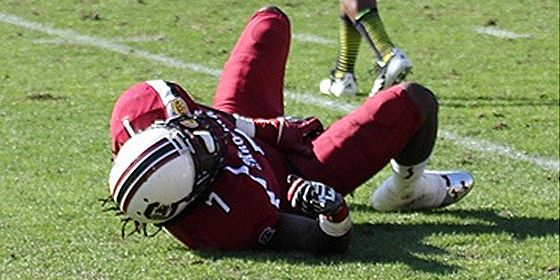 If you are a football fan you have likely seen the video of South Carolina Defensive End Jadeveon Clowney big hit by now, but that only tells part of the story from the Outback Bowl. Clowney nearly broke the internet by blowing up Michigan Running Back Vincent Smith in the backfield, causing a fumble, in an early favorite for the hit of the year.

The hit was the first major contribution from Clowney during the game. He had been limited due to an injury sustained during a routine play in the first quarter, when Smith, attempting a cut block, put him helmet right into Clowney’s crotch. The blow staggered Clowney, leaving him on the ground grasping his crotch for several seconds.

While Clowney’s hit on Smith was legal, and within the scope of his position, we have to think that he derived some pleasure from taking out Smith after his low blow. While revenge might not have been the only factor in the play for the NFL-bound End, he definitely came out the winner in their exchange.